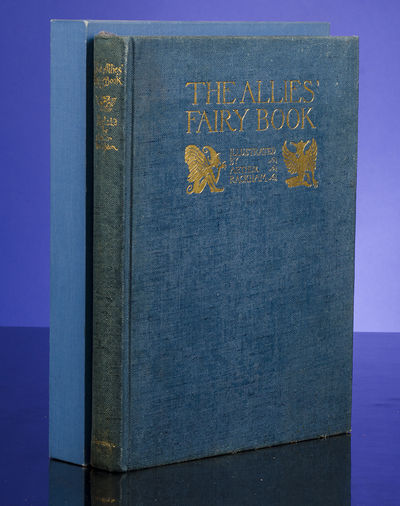 Edition DeLuxe Limited to 525 numbered copies signed by the artist, this being No. 173.

"His book for 1916, The Allies' Fairy Book, published by Heinemann as a contribution to the mood of patriotism and cooperation between the Allies, is likewise composed of images that thrill and inspire, but do not terrify. Where in Grimm, Rackham happily includes illustrations of people battering each other to death or hanging by the hair and caught in brambles alive or half dead, this kind of image is not dwelt upon in The Allies' Fairy Book... even though some of the stories are as red in tooth and claw as any of their type and certainly would have allowed a violent interpretation. Reports coming back from the Front, eye-witness accounts of devastation, violation and butchery, were quite enough to suggest to Rackham and his publishers that at this time the Allies could be spared violent images with their family reading at home." (Hamilton, Arthur Rackham. p. 109).

"When The Allies' Fairy Book was published, [Edmund] Gosse wrote to Rackham (6th November 1916): 'Will you think me impertinent if I tell you how beautiful I think your illustrations... their variety, and ingenuity, and the delicacy of your fancy, and the romantic ardour of your mind, were never so humble a degree - in a work so charming'" (Hudson, p. 104).

The tales, from their nation of origin, include:

English: Jack the Giant-Killer
Scottish: The Battle of the Birds
Welsh: Lludd and Llevelys
Irish: Guleesh
French: The Sleeping Beauty
Italian: Cesarino and The Dragon
Portuguese: What Came of Picking Flowers
Japanese: The Adventures of Little Peachling, The Fox's Wedding and The Tongue-cut Sparrow
Russian: Frost
Serbian: The Golden Apple-tree and The Nine Pea Hens
Belgium: The Last Adventure of Thyl Ulenspiegel