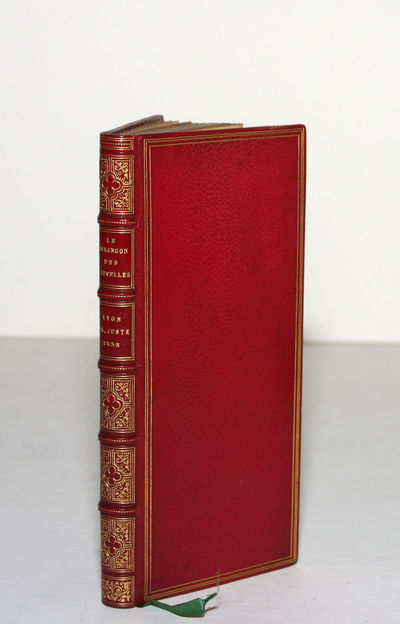 by [FRENCH RENAISSANCE LITERATURE].
Lyons: François Juste, 1533. Hardcover. Near Fine. 8vo, [14 x 6.3 cm]. (1) f., 80 ff., woodcut architectural title border incorporating printer's initials, 29 small woodcuts flanked by columns, black-on-white woodcut initials. Bound in 19th-century red morocco gilt by Trautz-Bauzonnet, gold-tooled green morocco doublures, marbled endpapers, all edges gilt, in a pale blue chemise with green morocco spine label. Binding pristine, with the fine ex libris of its previous owners affixed to the front flyleaf. A 1-cm paper flaw at f. 38 affecting a few letters, very faint uniform browning. Only recorded copy of a very early illustrated edition (3rd) of this anonymous collection of 'nouvelles,' a literary genre presenting brief prose narratives taken from bourgeois life. The Parangon des nouvelles honnestes utiles et delectables, following the famous Les cent nouvelles nouvelles (c. 1460), collected vernacular tales purporting to be both true and current (i.e., relating to recent events, hence 'nouvelle') and so eschewed more established prose forms which relied on classical mythology, historical exempla, chivalric fantasy, and animal fable, in favor of reports on greedy merchants, drunken millers, lascivious housewives, and the like. Largely derived from the Decameron of Boccaccio, Lorenzo Valla's Apologues, Poggio Bracciolini's Facetiae and the anonymous Germanic Ulenspiegel, the Parangon packaged together old and new for popular consumption, resulting in what one scholar has called "a magma ready for every kind of metamorphosis" (Pérouse [1977], p. 7), that is to say, the unformed raw material that soon would cool into the more recognizable and longstanding genres of the novel and short story. These "issues of novelty, fictional accreditation, historical veracity, and the chivalric narrative past [.] were also played out in a variety of other critical settings encompassing works both of shorter and longer fiction," most famously in François Rabelais' proto-novels Pantagruel (1532) and Gargantua (1534), exact contemporaries of the Parangon (G. Norton, p. 306). Often bawdy and salacious, the nouvelle was initially overlooked by scholars of early-modern literature, but today its status as a "non-mimetic, self-conscious, intertextual, ironic, perhaps even skeptical mode of writing" has cemented it as a pivotal precursor to a modern literary sensibility (LaGuardia, p. 16). In short, the nouvelle frustrates and delights scholars today much as it did its contemporaries, and its importance springs from the uneasy, active reading it requires from its readers. The present volume's tall and slender 'agenda' format - a shape associated with easy portability and personal use - is very rare in this period, occurring (when it does) almost exclusively in French Books of Hours, a genre which blends private devotion (prayer) with a need for constant practical reference (liturgical hours, calendars) (see the Heures printed by Antoine Chappiel [1504], Pierre le Dru [1505-6], Gillet Hardouin [1509 and 1515], T. Kerver [1514], and Germain Hardouin [1534 and 1526]; a notable secular exception is the Manuale Vergilianum [Strasbourg, Johann Grüninger, 1507-10?]). It is intriguing that the impious, casual tales of the Parangon should have been printed in a physical format with such pious overtones: does its unusual form merely result from a desire for easy practical use, or does it carry some surplus of ironic meaning? Even the book's program of illustration participates in an (oddly modern) mixing of material: its numerous woodcuts are quite clearly borrowed from other (still untraced) sources: figures seated at dinner, a scholar with his amanuensis, women spinning yarn, a statue of Mars, a monk preaching in his pulpit, lovers embracing, a man drunk on wine, a mourner bent over a shrouded corpse, a Janus-faced figure, a sword duel - these all invite readers to puzzle out how such images might relate to each other and to the texts they supposedly elucidate... (Inventory #: 5435)
$31,498.00 add to cart Available from Martayan Lan
Share this item
Martayan Lan, Inc.
Offered by