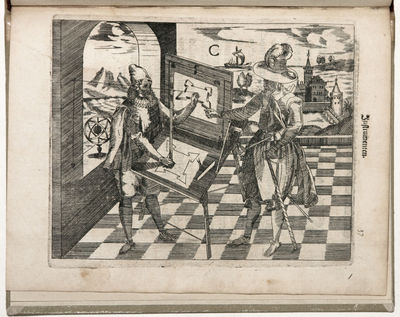 by FAULHABER, Johann
Frankfurt am Main: Wolffgang Richter and Anthonius Humm, 1610. Hardcover. Near Fine. 38 pp., (1) f. integral blank, (3) folding plates, with engraved title, half-page engraved arms at dedication, and three engravings lettered A-C in the text (first two being half-page and the third full-page). Quarter bound in modern tan calf and pasteboards, title gold tooled on spine, red sprinkled edges. Very minor rubbing to binding. Small printer's crease to corner of title, some dampstaining at pp. 19-33, an occasional minor spot in the margin, small tear where third plate connects to binding. Overall excellent. Rare first edition of this illustrated treatise on instrument making by the Ulm mathematician and military architect Johann Faulhaber (1580-1635), a work principally important in the history of science and technology for its engraved technical illustrations of Galileo Galilei's (1564-1624) famous 'proportional compass' - the first such illustrations to appear in print - and for its revealing anecdote of how Faulhaber came to learn of the instrument and of its inventor, "Gallileus de Gallilei Professor zu Padua." This device - more usefully described as 'Galileo's Sector' to distinguish it from the various 'compasses' which appeared in the late sixteenth century - has been called the forerunner of the pocket computer, and so revolutionary was its utility that it "suddenly made it possible for nearly everyone to deal effectively with almost any [mathematical] problem arising in practical matters by following rather simple instructions" (Drake, p. 10). Galileo invented his remarkably useful instrument around 1596, calling it the geometrical and military compass. The device bears nine sets of lines or scales for calculating square and cube roots, determining interest rates, making monetary exchanges, squaring the circle, performing trigonometric calculations for surveying, and determining specific weights of metals and stones (essential for artillery). Galileo first described this instrument in 1606 in a privately printed user's guide La Operazione del Compasso... (printed in only 60 copies in his house) to accompany the instrument but without illustrating it so as to minimize the risk of piracy, a serious and chronic problem for him at the time. In the present work, Faulhaber explicitly credits Galileo with being the instrument's first inventor ("and not I"), and illustrates the two sides of the proportional compass for the first time in print, on separate folding plates, with his calibrations stressing its mercantile qualities with adjustments for the measuring standards of Ulm. He includes a summary of the instrument's wider uses and marvels at its flexibility, noting that his good friend, the excellent painter Georg Brentel of Lauingen (1581-1634) has already devised a way to use it for recalibrating sundials (Brentel would publish on Galileo's invention in 1614). The Galileo scholar Stillman Drake tells us that Faulhaber's text relates (p. 27) "that his acquaintance with [the instrument] dated from a visit paid to him (probably in 1603) by Mathias Bernegger en route from Austria to Strasburg. Faulhaber had recognized the value of the instrument, although he considered some of its scales less useful than others that he put in their places. He said further that before publishing he had made careful inquiries to determine the name of the original inventor and had learned that this was Galileo Galilei, professor of mathematics at Padua. Because Bernegger seems never to have visited Italy, it is probable that he had seen the silver example of the instrument sent by Galileo to the Archduke of Austria and in that way knew of its inventor. Faulhaber's inquiries were probably made because of other claimants who appeared in the meanwhile" (S. Drake, p. 26), professing to be the author and/or maker of Galileo's remarkable device. (Inventory #: 5513)
$35,000.00 add to cart Available from Martayan Lan
Share this item
Martayan Lan, Inc.
Offered by