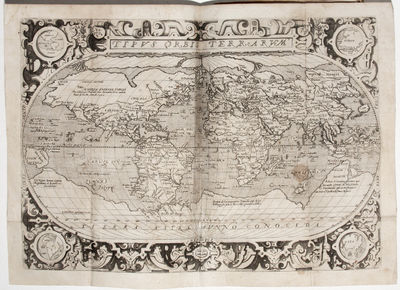 by BOTERO, Juan [Giovanni]
Vallodolid: Heirs of Diego Fernandez de Cordova, 1603. Hardcover. Near Fine. Large quarto, [20 x 29 cm]. (4) ff., 24 ff., 207 (i.e. 205) ff.; 1 ff. terminal blank; 110 ff., 5 engraved folding maps, engraved arms on title pages, woodcut headpieces and initials. Contemporary limp vellum, remnants of ties, red sprinkled edges. Vellum slightly cockled, some rubbing and staining to covers, pen trials on lower cover. Early ownership inscriptions on title page, errata and at colophon, (see: Provenance information at the end of the description). Loss to corner of f. 50 of the first part, paper flaw at f. 40 of second part without any loss of printed text) light scattered staining & foxing; a few small wormholes to the margins of the first leaves: some minor spotting to some leaves and maps, minor marginal tear to Asia map, nonetheless a broad-margined, fresh copy. Unsophisticated and excellent. A very attractive example in nice original condition of the very rare 1603 reissue (new title page only) of the first Spanish edition (1599/1600) of Giovanni Botero's (1544-1617) influential history of the world. Our copy is remarkably complete with all 5 folio-size maps of the world and continents based Ortelius but newly-engraved with modifications by Hernando de Solis (world map, the Americas, Asia, Africa and Europe). First published in Italian in 1591-92 with 4 small folding maps, the Relationi universali was considered the most up-to-date geography of the late sixteenth century and was quickly translated into Spanish, French, German, Latin, Polish and English. The work, "through its fullness, its accuracy, and its author's acute observations, was more highly regarded than any of the other compilations of this type. For almost a century following its initial appearance, the Relationi was used as a geopolitical manual by European students, scholars, and statesmen" (Lach II, ii, p. 244). The 5 large folio-size maps, dated and signed on the Americas plate by Hernando de Solis 1598, are richly engraved, particularly the world map and the map of the Americas. Geographically, the map of the Americas is a "curious mix of the two similar maps by Abraham Ortelius of 1570 and 1587," (Burden) blending geographical elements from both editions and adding the proud comment that the southern continent (Magallanes) was discovered by a Spanish pilot. Palau, aware that sixteenth-century Spanish printed maps of this sort were quite uncommon, observed that the "early Italian editions are not as valuable as the Spanish" (no. 33704). It is also worth noting that, according to Burden, Hernando de Solis's North America map is only one of a handful of that region printed in Spain, and the first since the 1552 Zaragoza example by Lopez de Gómara (Burden also observes that "This well-engraved map is rarely found in the book, which is itself scarce"). As one might expect from one of the leading political economists of the day, Botero not only provides geographical descriptions, but also important statistical data relating to nations' economies. The first part of the book in this Spanish edition has been reconfigured, treating Spain, and Spanish territories in the New World. Botero's conception of "The New World" includes the discoveries in the Pacific and Japan, as well as in the Americas, where he gives attention to Florida, Mexico, California, the coasts of Central and South America, the Straits of Magellan, Peru, the legendary Norumbega of northeastern North America and Coronado's 'Quivira' on the central plains. The kingdom of Prester John receives considerable attention in the section on Africa. Botero makes use of the latest information from Pietro Maffei and João de Barros in his analysis of Asia and concludes that "China's cities are the greatest, its political administration the best ordered, and its people the most industrious and ingenious in the world" (Lach, II, ii, 249). (Inventory #: 2612)
$48,500.00 add to cart Available from Martayan Lan
Share this item
Martayan Lan, Inc.
Offered by