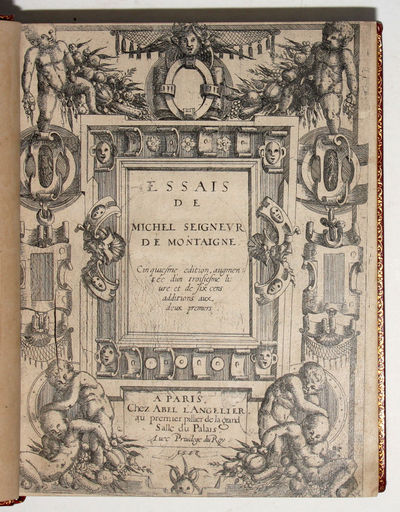 by MONTAIGNE, Michel de.
Paris: chez Abel L'Angelier au premier pillier de la grand Salle du Pallais, 1588. Hardcover. Very Good. 4to [24.3 x 18.8 cm]. (4) ff., 496 ff., first leaf is an etched title, woodcut headpieces and initials. Bound in nineteenth-century red morocco, spine gold stamped in six compartments, gilt turn-ins, marbled endpapers, ribbon bookmark, all edges gilt. Minor rubbing and edge wear to spine and boards, book labels inside upper cover and on front flyleaf, title engraving trimmed at or just inside platemark as is usual, faint inscription of verso of f. (4), some edge wear to f. 2, small loss at corner of f. 247 (SSS iii), a few minor paper flaws, very occasional minor staining, very minor browning to a few quires. The first complete edition of Michel de Montaigne's (1533-92) Essais, one of the most influential and profound works of world literature. This is the last edition printed during the author's lifetime and the definitive text on which all later editions are based. The volume, the so-called 'cinquièsme edition', is in fact the fourth edition, and contains the first appearance of the third book, printed from Montaigne's manuscript copy. (Sayce offers an interesting hypothesis for the odd numbering of this edition: "The substitution of fifth for fourth edition may have been prompted by the desire to suggest that the book was selling better than it was, a trick unknown today.") Montaigne's association with Abel L'Angelier, among the great printer-editors of the time, was as much a coup for the author as it was for the publisher, and the present volume's format, "larger than the normal L'Angelier quarto, gives Montaigne's book a certain prestige" (Desan, p. 42). The etched title page, of putti, masks and garlands in a quasi-architectural framework, is here in its second state, with the date added and the 'g' of 'grand' corrected; the copperplate seems to have been a bit large for the book, as it is, "often trimmed in almost all examples, even those with the fullest margins" (Desan, p. 42). The present copy is typical of surviving 1588 editions, almost all of which have been rebound in nineteenth-century red morocco (Desan, p. 42). The volume carries the bookplates of Horace de Landau (1824-1803) and the Swiss poet Albert Natural, as well as a label indicating that it was exhibited in 1949 at the Lucerne exhibition "Dix Siècles de livres français" (cat. no. 130 bis). OCLC locates U.S. copies at the Morgan Library, Yale, Princeton, Harvard, Chicago, Williams, Virginia, NYPL, and Clark Art. * P. Desan, Biblioteca Desaniana: Catalogue Montaigne, pp. 41-2, no. 14; Tchemerzine-Scheler IV, 843; Sayce & Maskell, A Descriptive Bibliography of Montaigne's Essais, 1580-1700, no. 4; PPM note 95. (Inventory #: 4823)
$65,000.00 add to cart Available from Martayan Lan
Share this item
Martayan Lan, Inc.
Offered by