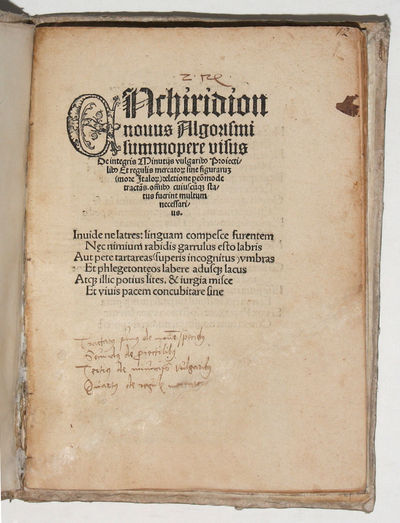 by HUSWIRT, Johannes
Cologne: In officina H. Quentell, 1504. Hardcover. Very Good. 8vo [19.5 x 14.5 cm]. (20) ff. Bound in early pasteboards, bookplate of Robert John Verney, Lord Willoughby de Broke (1809-62) inside upper cover. Some staining to boards. Contemporary annotations on title page and final page, restoration to bottom corner or title page not affecting text. Rare 1504 second edition (first in 1501) of this early computational handbook, the Enchiridion novus Algorismi of Johannes Huswirth, one of the earliest books on the Arabic system of numerals printed in Germany (see De Morgan, p. 4), containing the rules of the numerical operations and including the first commercial computing rules. The scarcity of early editions (a third was printed in 1507) of this text is perhaps due to its frequent use in calculation - the Greek 'enchiridion' means 'that which stays in the hand' - and indeed the book might even be considered an early form of portable calculator. "This is the earliest treatise on algorism printed at Cologne. It is divided into four 'Tractati' and includes the fundamental operations, a brief treatment of abacus or line reckoning, common fractions, rule of three, partnership and over twenty miscellaneous rules. In the algoristic treatment of integers, Huswirt places 'duplatio' (doubling) after multiplication, and 'mediatio' (halving) after division [.] It is interesting to see how these chapters on doubling and halving, of which we have traces in ancient Egypt, persisted throughout the Middle Ages and well into the sixteenth century" (Smith, 74-5). 'Algorism,' the technique of performing basic arithmetic by writing numbers in place value form and applying a set of memorized rules and facts to the digits, quickly superseded earlier calculation systems that used a different set of symbols for each numerical magnitude and often required a device such as an abacus. The word 'algorism' derives from the name of Al-Khwarizmi (c. 780-850), a Persian mathematician and astronomer working in Baghdad. His Arabic-language treatise was translated into Latin in the 12th century under the title Algoritmi de numero Indorum; in late Medieval Latin, algorismus, the corruption of his name, simply meant the "decimal number system." In 17th-century French, the word's form, but not its meaning, changed to 'algorithm,' following the model of the word 'logarithm,' this form alluding to the ancient Greek arithmos ('number'). English adopted the French very soon afterwards, but it was not until the late 19th century that 'algorithm' took on the meaning that it has in modern English. In English, the term it was first used about 1230, and then Chaucer used it in 1391. The mathematician Johannes Huswith (fl. 1501) was born in Saanen, studied at Cologne, where gained the title of magister atrium, and after his service as army chaplain and personal confessor to Cardinal Matthäus Schiner during the Siege of Pavia (1512), in 1515 he received the parish of Saanen with papal decree. OCLC locates no U.S. copies and only 2 copies worldwide of this second edition (Bayerische Staatsbibliothek, Germany, and Basel/Bern University, Switzerland). Columbia, Michigan and Wisconsin hold copies of the 1501 first edition; no U.S. institutions hold the 1507 third. * Smith, Rara Arithmetica, pp. 74-7; Augustus De Morgan, Arithmetical Books, p. 4; Graesse, v. 3, p. 396; VD 16 H6209. (Inventory #: 5426)
$18,500.00 add to cart Available from Martayan Lan
Share this item
Martayan Lan, Inc.
Offered by