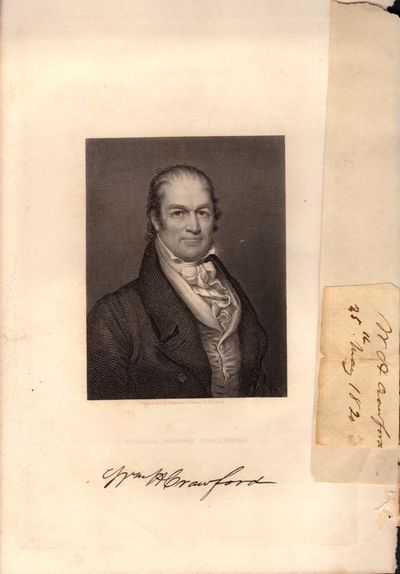 by [William H. Crawford]
[Georgia], 1820. Autograph. Very good. May 25, 1820 clipped signature of William H. Crawford. From wikipedia: William Harris Crawford (February 24, 1772 - September 15, 1834) was an American politician and judge during the early 19th century. He served as United States Secretary of War from 1815 to 1816 and United States Secretary of the Treasury from 1816 to 1825, and was a candidate for President of the United States in 1824. Also from wikipedia: "In 1803, Crawford was elected to the Georgia House of Representatives as a member of the Democratic-Republican Party, and he served until 1807. He allied himself with senator James Jackson. Their enemies were the Clarkites, led by John Clark. In 1802, he shot and killed Peter Lawrence Van Alen, a Clark ally, in a duel. Four years later on December 16, 1806, Crawford faced Clark himself in a duel, resulting in Crawford's left wrist being shattered by a shot from Clark, but he eventually recovered.[1] In 1807, Crawford joined the 10th United States Congress mid-term as the junior U.S. Senator from Georgia when the Georgia legislature elected him to replace George Jones, an appointee who had held the office for a few months after the death of Abraham Baldwin. (Inventory #: 8423)
$125.00 add to cart or Buy Direct from Americana Books
Share this item

Personal Memoirs of U. S. Grant. Volume II only

by Iobst, Richard W. (history by); Manarin, Louis H.; Lucas, Wade (with a narrative on the reactivated regiment)