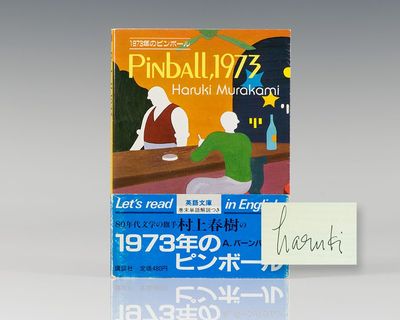 by Murakami, Haruki
Tokyo: Kodansha Publishers, 1985. First edition in English of Murakami's second novel. Small octavo, original wrappers as issued. Boldly signed by Haruki Murakami on the title page. Fine in a fine dust jacket. The wrap-around band is in very good condition. Translated by Alfred Birnbaum. Pinball, 1973 is the second book in the Trilogy of the Rat series, it is preceded by Hear the Wind Sing (1979) and followed by A Wild Sheep Chase (1982). It is the second novel written by Murakami. His work has been translated into more than fifty languages, and the most recent of his many international honors is the Jerusalem Prize, whose previous recipients include J. M. Coetzee, Milan Kundera, and V. S. Naipaul. (Inventory #: 23088)
$2,800.00 add to cart or Buy Direct from
Raptis Rare Books
Share this item