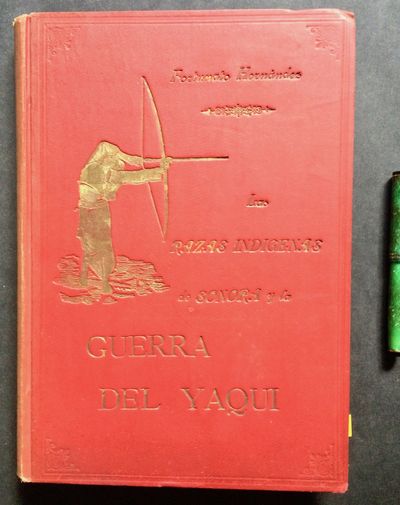 by Hernandez, Fortunato
Mexico City: Talleres de la Casa Editorial ."J. de Elizalde", 1902. Folio, 33 x 23cm, pp [xx], 295, [4, incl. list of plates, all accounted for]. With three folding maps, one in color of the Seri lands, 4 chromolithographs of Seri women, pottery and dye stuffs, 38 full page b/w photos and drawings -- all outside of the text numeration -- and many illustrations in the text. [Palau: 113526]. The book is a rather elaborate production, and judging from the care and expense involved in its printing, one would surmise that it was subsidized by the government. It is certainly intended as a serious ethnological study of the Yaquis, incl. the Seris and other tribes of this area of Sonora. Illustrations and photos of their tools, clothing, baskets, housing, physiognomy, etc. are included, as well as two vocabularies of Seri and Cahita dialects.The Yaqui wars were a series of conflicts that kept erupting for centuries, esp. during the Mexican (as opposed to colonial) period as the government made greater efforts to integrate these tribes - i.e. impose taxes upon them and take their lands. It became especially virulent during the last years of Porfirio Diaz' reign in which a policy of virtual genocide was enacted. Hernandez, the author, was a doctor and, apparently, a Porfirista, sympathetic to the government's goals and yet obviously to the Yaquis themselves as well. The book is scarce in the market - very few appearances at auction. It's size and heft would likely make it difficult to find in good condition. This copy, however, is quite presentable: aside from sunning on the spine, and a some slight water staining on a few preliminary pages, it is in very good condition. The elaborate publisher's red cloth binding, though somewhat darkened with age, still retains its gilt title material and the image of a Yaqui warrior taking aim with his bow. Very good. (Inventory #: 7432)
$750.00 add to cart Available from Plaza Books
Share this item