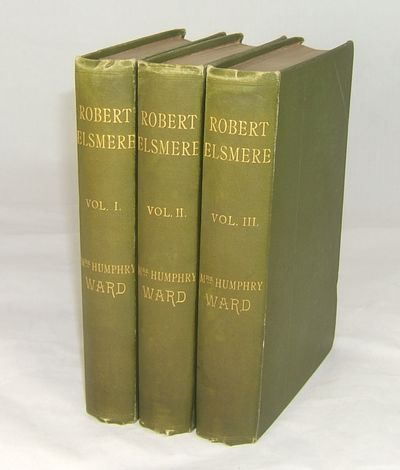 by Ward, Mrs. Humphry
Smith, Elder, 1888. Ward, Mrs. Humphry. ROBERT ELSMERE. In Three Volumes. London: Smith, Elder, 1888. First Edition. A NEAR FINE set in original publisher's dark blue-green fine-diaper cloth, only the slightest wear to the extremities, simply superb for this title. ROBERT ELSMERE, now mostly familiar only to the Victorian Fiction specialist, was one of the single most important novels about religious faith and doubt published in the late Victorian era. It presented an uncanny and minute psychological analysis of its central character, creating a vision of Christianity based on social concern and not pure theology. Mary Augusta Ward (1851-1920) is sometimes chided by those with rear view mirrors for being part of an anti-suffrage movement in her later years but writers of the times such as Thomas Hardy recognized her subversive pro-woman subtext and she was much admired. Her charitable work was equally celebrated; she is not a writer to be forgotten. To quote John Carter in his landmark 1947 exhibition catalogue: "It is hard nowadays to realize how deeply Mrs. Ward's novel stirred the thoughtful public of the day." We've never seen a nicer copy of this important High Spot, one of the triumphant achievements of Victorian Women's Fiction and, in terms of faith questioned, one of the most important novels of the times. Wolff 7024. Sadleir 3293. . First Edition. Decorative Cloth. Fine. (Inventory #: 002132)
$1,000.00 add to cart Available from
Lakin & Marley Rare Books
Share this item
Lakin & Marley Rare Books
Offered by

London : Trubner , 1859
(click for more details about LOVE ME LITTLE, LOVE ME LONG (Original Publisher's Cloth, Two Volumes))
View all from this seller>