LONDON PRIDE; or When the World Was Younger) 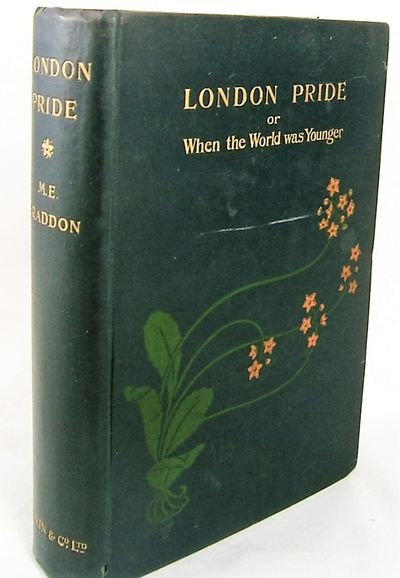 by Braddon, M[ary] E[lizabeth] M. E.
London: Simpkin Marshall Hamilton Kent, 1896. Braddon, M[ary] [E]lizabeth. LONDON PRIDE; or when the world was younger. London: Simpkin, Marshall, Hamilton, Kent, (1896). First Edition. A NEAR FINE copy in original publisher's decorated cloth. A few abrasions to the boards but a remarkably unworn copy. Light foxing to prelims. This is one of M. E. Braddon's later historical mysteries, set both in England and France and involving a member of royalty accused of kidnapping a beautiful woman. The most famous collector of Victorian fiction ever, in terms of depth and numbers (he practically cornered the market with ten thousand titles or so), was Harvard Professor Robert Lee Woolf, and to him Braddon was every bit as skilled an author as her Victorian contemporaries. His book about her, entitled SENSATIONAL VICTORIAN, is well worth reading if one is interested in learning more. Braddon's "problem" was her astonishing success with the circulating libraries. Beginning with LADY AUDLEY'S SECRET in 1861, Braddon rose to become the best selling mystery author in England (bar none) until the end of the century. Unjustly forgotten, she wrote dozens of novels which Professor Wolff considered uniformly brilliant and innovative but, as with such 20th century writers such as Margaret Mitchell or Daphne du Maurier, too much popular success made critics wary of bestowing literary praise. Her books are highly sought after and rarely found. . First Edition. Near Fine. (Inventory #: 002126)
$300.00 add to cart Available from
Lakin & Marley Rare Books
Share this item
Lakin & Marley Rare Books
Offered by

THE RED PONY (First Illustrated Edition, Signed in 1947 By the Entire Cast and Crew of the Film Adaptation)

New York : Viking , 1945
(click for more details about THE RED PONY (First Illustrated Edition, Signed in 1947 By the Entire Cast and Crew of the Film Adaptation))

London : Longmans, Green , 1902
(click for more details about THE DISENTANGLERS)
View all from this seller>