The Story of Cupid and Psyche: Psyche Comes to the First Sister. PRINT 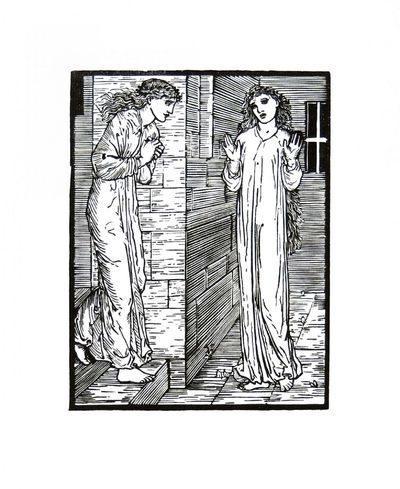 by Morris, William; Edward Burne-Jones
London: Clover Hill Editions at the Rampart Lions Press, 1974. Unbound. Fine. Burne-Jones, Edward. Burne-Jones, Edward. Unbound. Prints (sold individually) of Burne-Jones's illustrations, which were originally designed to accompany The Story of Cupid and Psyche in a Kelmscott version of Morris's The Earthly Paradise. The book was never completed. The original woodblocks, carved mostly by William Morris, were left to the Society of Antiquaries after his death. The blocks were "rediscovered" in the 1960s, and in 1974, the Rampant Lions Press published an edition of the work using them. These engravings were printed from those original wood blocks. The book and prints were in a limited edition of 100. A separate cloth box housed 44 loose prints. Paper size: 13 x 9 inches. Image size: 4.25 x 3.25 inches. PRE/100716. (Inventory #: 30554)
$80.00 add to cart or Buy Direct from
Kelmscott Bookshop
Share this item

London : Macmillan and Co , 1878
(click for more details about Swallow-Flights)
View all from this seller>