THE STORY OF THE CAMPAIGN: A Complete Narrative of the War in Russia. Written in a Tent in the Crimea 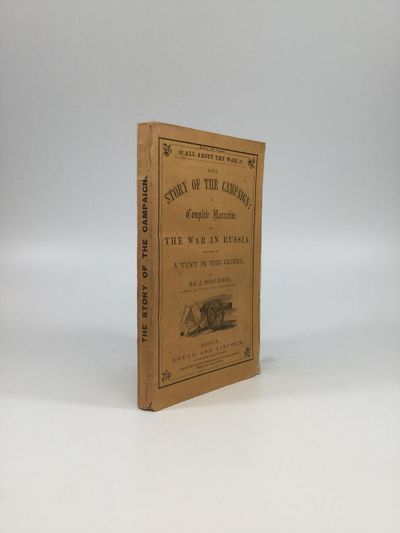 by Hamley, Major E. Bruce
Boston: Gould and Lincoln, 1855. First edition. Soft cover. Very Good. 184 p. First American edition, with the publisher's ads at the front and rear. "General Sir Edward (1824-93)[,] who illustrated his account with his own drawings, was aide-de-camp to Sir Richard Dacres, commanding the artillery, throughout the Crimean campaign. His account had previously appeared as contributions to Blackwood's magazine" (Cross, Anthony: In the Land of the Romanovs, p.196). In the original printed paper wrappers, which feature two woodcuts. Faint period previous owner's name to the title page, with the same name written in pencil on the front flyleaf. Just a hint of foxing to the contents. Mild fading and wear to the wrappers, with trace evidence of a neat repair to the spine head; otherwise very good. (Inventory #: 63351)
$250.00 add to cart or Buy Direct from Johnson
Share this item

MEANING NO OFFENSE: being Some of The Life, Adventures and Opinions of Trader Riddell, an Old Book Reviewer, in the Dark Continent of Contemporary Literature; including an Assortment of Strange Interviews and Literary Follies

New York : The John Day Company , 1928
(click for more details about MEANING NO OFFENSE: being Some of The Life, Adventures and Opinions of Trader Riddell, an Old Book Reviewer, in the Dark Continent of Contemporary Literature; including an Assortment of Strange Interviews and Literary Follies)
View all from this seller>