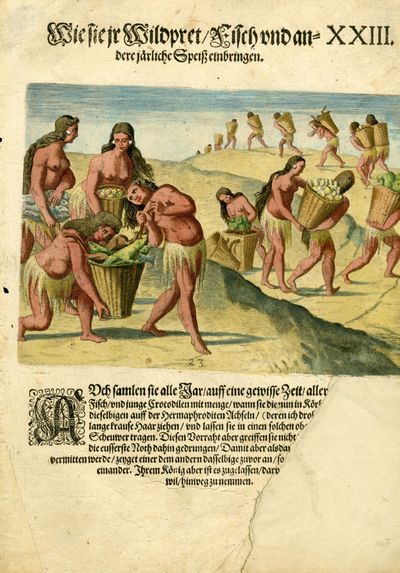 It reads (translation from Discovering the New World, Based on the Works of Theodore de Bry, Harper & Row, 1976): "At a certain time of year the Indians collect all kinds of game, fish and even crocodiles. Baskets are filled with these creatures and put on the shoulders of curly-haired hermaphrodites whom we have already described. All this is taken to storehouses where it is not touched except in cases of extreme need, when, to avoid disputes, the Indians come to an agreement among themselves, which illustrates the harmony that exists among them. However, the king is at liberty to take what he chooses." Quantity Available: 1. Shipped Weight: Under 1 kilo. Category: Cooking, Wine & Dining; History. Inventory No: CAT000450. (Inventory #: CAT000450)
$500.00 add to cart or Buy Direct from Pazzo Books
Share this item

A Brief History of Seven Killings

New York : Riverhead , 2014
(click for more details about A Brief History of Seven Killings)
View all from this seller>