Engraving from a German Language Edition of Le Moyne's Brevis narratio [ca. 1591 from De Bry's "Grand Voyages to the Americas"]: XLI. Mode of Collecting Gold in Streams Running From the Apalatcy Mountains 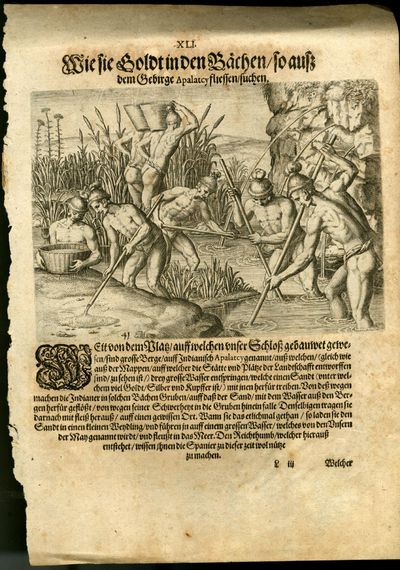 "Some considerable distance from the place where we have constructed our fort, rise some high mountains called Apalatcy in the Indian tongue. As can be seen from our map, these mountains give birth to three rivers in whose sand there is much gold, silver and copper. The natives dig trenches near the banks of the rivers so as to catch the sand brought down by the current. The water rapidly fills these up and goes on further. A short time later the Indians remove the sand which has gathered there with hollow reeds and convey it by canoe down the great river which runs into the sea and which we named the river of May. The Spaniards have taken great advantages of the riches coming from these places." Translation from Discovering the New World, Based on the Works of Theodore de Bry, edited by Michael Alexander (New York: Harper & Row, 1976) Size: Folio. Quantity Available: 1. Shipped Weight: Under 1 kilo. Category: Americana; Exploration. Inventory No: 046241. (Inventory #: 046241)
$850.00 add to cart or Buy Direct from Pazzo Books
Share this item

The Doomsday Clock at 75

Hat & Beard , 2022
(click for more details about The Doomsday Clock at 75)
View all from this seller>