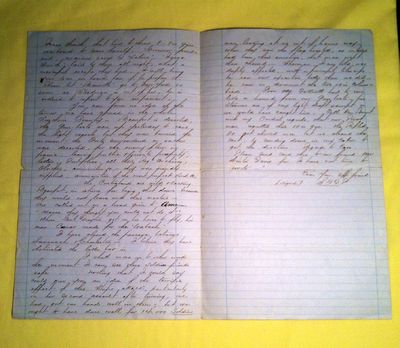 by DuPont, Samuel, Admiral
Port Royal, South Carolina, aboard the "Wabash": USN, 1861. Official Scribal Copy of Order. Very Good +. Original & Contemporary Autograph Copy of Letter sent by Admiral Samuel DuPont to Admiral Goldsborough about his victory over Confederate forces defending Port Royal. Excellent condition for an official copy made at the time of an extremely important and huge early Union naval operation and amphibious landing on Confederate territory. Because the Union Navy was able to capture Port Royal (modern Hilton Head Island, S.C) and its environs), the Union was able to create a bastion midway along the Confederate coastline from which troops could be positioned or stationed and then moved. The island also provided a highly convenient centrally located coaling and watering port for Union warships engaged in blockading Southern ports. Exceptional importance and condition! (Inventory #: 254)
$1,450.00 add to cart or Buy Direct from
Borg Antiquarian
Share this item