The City and the Pillar. 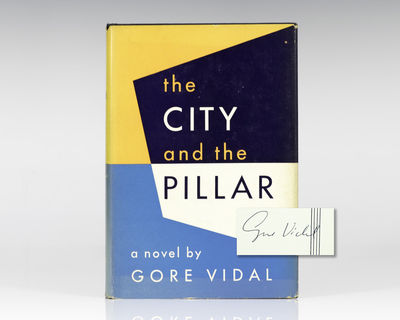 by Vidal, Gore
New York: E.P. Dutton, 1948. First edition of this landmark novel. Octavo, original black cloth. Signed by the author on the title page. Fine in a bright near fine dust jacket with two small chips to the crown but does not show the fading endemic to the spine panel. A very sharp example. Stylistically influenced by Hemingway, this work, "is distinguished by its honesty and lack of self-pity; the central figure is unexceptional in every respect but his sexual choices" (Stringer, 690). "One of the best novels of its kind. . . . It isn’t sentimental, and it is frank without trying to be sensational and shocking" (Christopher Isherwood). (Inventory #: 25087)
$1,750.00 add to cart or Buy Direct from
Raptis Rare Books
Share this item