[AUTOGRAPH LETTER, SIGNED, IN FRENCH, FROM CHARLES BOTTA TO HIS TRANSLATOR, BOSTON ATTORNEY GEORGE ALEXANDER OTIS, EFFECTIVELY A LETTER OF INTRODUCTION FOR A FRIEND OF BOTTA'S WHO WILL BE VISITING AMERICA 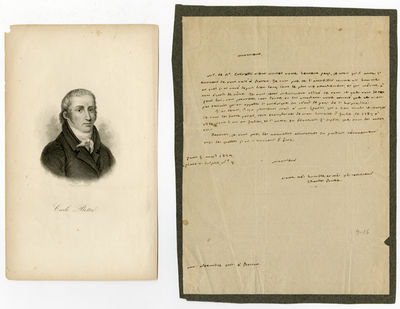 by Botta, Charles
Place St. Sulpice, Paris, 1829. [1]p. Old folds, light spotting, pasted down at corners, one short horizontal fold separation. Very good. Accompanied by an engraved portrait of "Carlo Botta." An interesting personal correspondence from Italian historian Charles Botta, written to the translator of his book on the American Revolution, first published in English in Philadelphia as HISTORY OF THE WAR OF THE INDEPENDENCE OF THE UNITED STATES OF AMERICA in 1820. The recipient of this letter was George Alexander Otis, a Boston attorney and translator of Botta's work from its original Italian. Botta, a physician in the French army as well as an historian, is chiefly remembered for his 1824 history of Italy, and for his account of the American Revolution.

Botta's letter acts as a letter of introduction for his friend, Baron Crivelli. Accompanied by an English translation, which reads:

"Baron Crivelli plans to visit your lovely country; I believe he will have a moment to visit you in Boston. Please do welcome him as a longtime dear friend of mine who will probably become one of yours. I will feel much obliged if you do all you can for him, proving thus that it is not in vain that it is said that North America is the country of hospitality. I gave several months ago to Mr. [Jared] Sparks two copies of my History of Italy from 1789 to 1814, which he said he would bring to you. One is in Italian, the other one in French. I hope that you have them now in your possession."

Botta letters are exceedingly rare in the market, especially with any content related to America. This letter is not only written to Botta's American translator, but mentions Jared Sparks, American historian, educator, and minister. Otis and Sparks likely knew each other as fellow Bostonians, and shared a friend in Botta. (Inventory #: WRCAM52301)
$500.00 add to cart or Buy Direct from
William Reese Co. - Americana
Share this item