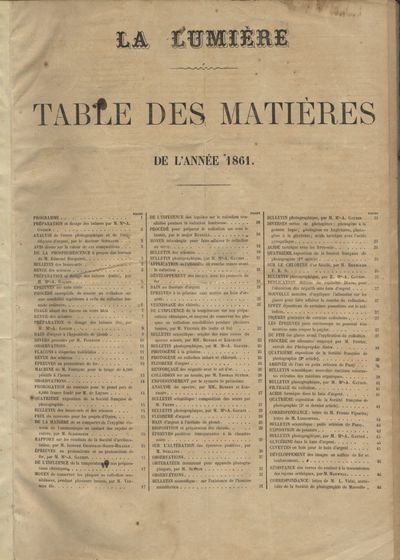 Paris: Alexis Gaudin, 1861. First edition. Folio, (ii), 96 pp. Bound in the nineteenth century with cloth-backed marbled paper over boards. 24 consecutive issues, published on the 15th and 30th of each month, each 4 pp. The complete production for 1861. Occasional stains or breaks, generally in a blank margin with the loss of a few letters in 4 instances; moderate toning; early folds from the mailing practice of the day. In all, very good. Includes the printed table of contents for the year. La LumiÃ¨re was the journal of the world's first photographic society, the SociÃ©tÃ© HÃ©liographique, founded by Colonel B.R. de Montfort in January, 1851. The SociÃ©tÃ© met in rooms at Col. de Montfort's home in central Paris; among its members were Baron Gros, the president, Ãdouard Baldus, Hippolyte Bayard, Henri Le Secq, Gustave Le Gray, Charles NÃ¨gre, Abel NiÃ©pce de Saint-Victor, Edmond Becquerel, EugÃ¨ne Delacroix, Champfleury, Charles Chevalier, N.P. Lerebours, Comte L. de Laborde, Prince de MontlÃ©art, and Baron de Montesquieu.
La LumiÃ¨re began publication on 9 February 1851, making it the third photographic journal to appear worldwide, and the first in Europe; the other two began a few months earlier. Initially, the journal was edited by F.A. Renard, and with the second volume beginning 16 November 1851, the ownership transferred from the SociÃ©tÃ© HÃ©liographique to Alexis Gaudin. Ernest Lucan became the editor on December of 1851 and continued in that position until he resigned in December of 1860. Marc Antoine Gaudin assumed the editorship for the final years of publication. This journal is invaluable for the artistic and well as the technical discussions and criticism.
WorldCat locates only a few institutional holdings, of which 4 have only the first 9 or 10 years, and the others have microform reels. (Inventory #: 51995)
$5,000.00 add to cart or Buy Direct from
Andrew Cahan: Bookseller
Share this item
Andrew Cahan: Bookseller, Ltd.
Offered by