Annuities upon Lives: or, The Valuation of Annuities upon any Number of Lives; as also, of Reversions. To which is added, An Appendix concerning the Expectations of Life, and Probabilities of Survivorship 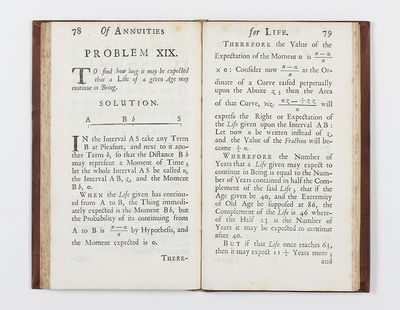 by MOIVRE, Abraham de
1 p.l., 4, viii, 108, [2], slip of errata mounted on final blank leaf. 8vo, attractive antique panelled calf (some light foxing throughout), spine lettered in gilt. London: Printed by W.P. and sold by F. Fayram et al., 1725. First edition. Employing the mortality statistics gathered by Edmund Halley in the 1690s, de Moivre formulated the theory of annuities. "De Moivre's contribution to annuities lies not in his evaluation of the demographic facts then known but in his derivation of formulas for annuities based on a postulated law of mortality and constant rates of interest on money. Here one finds the treatment of joint annuities on several lives, the inheritance of annuities, problems about the fair division of the costs of a tontine, and other contracts in which both age and interest on capital are relevant. Ths mathematics became a standard part of all subsequent commercial applications in England."-D.S.B., IX, p. 454. Very good copy. ❧ Garrison-Morton 1690. Stigler, The History of Statistics, pp. 70-85. (Inventory #: 3065)
$4,500.00 add to cart or Buy Direct from
Jonathan A. Hill, Bookseller
Share this item
Jonathan A. Hill, Bookseller, Inc.
Offered by