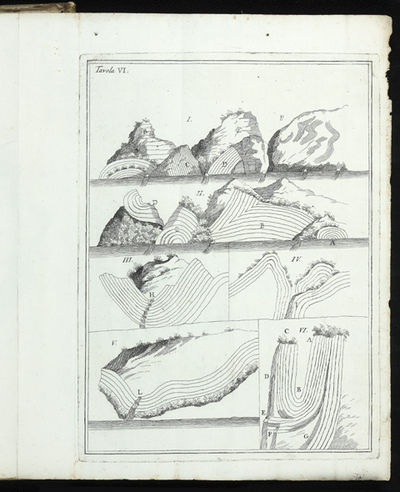 by MORO, Antonio Lazzaro
Engraved vignette on title, engraved head-piece & initial, & eight folding engraved plates (two frayed at fore-edge slightly affecting images). 7 p.l., 452 pp. Large 4to, cont. vellum over boards. Venice: S. Monti, 1740. First edition of the author's best-known and most controversial work. Moro (1687-1764), "was interested in how fossil-bearing rock came to be made into mountains, and he stressed the importance of fire and heat...Moro believed that most mountains and islands were raised by volcanoes, and he even thought that many stratified rocks had igneous origins. His most original insight consisted of a realization that there are two kinds of mountains, Primitive and Secondary, of different age and composition. This distinction, suitably elaborated, later became the cornerstone of historical geology."-Ashworth & Bradley, Theories of the Earth 1644-1830 (Linda Hall Library: 1984), 20. Very good copy. ❧ D.S.B., IX, pp. 531-34. Zittel, p. 32. (Inventory #: 3574)
$2250.00 add to cart or Buy Direct from
Jonathan A. Hill, Bookseller
Share this item
Jonathan A. Hill, Bookseller, Inc.
Offered by

Sunlight in a Room