National Danger, and the Means of Safety. By the Editor of the Annals of Agriculture 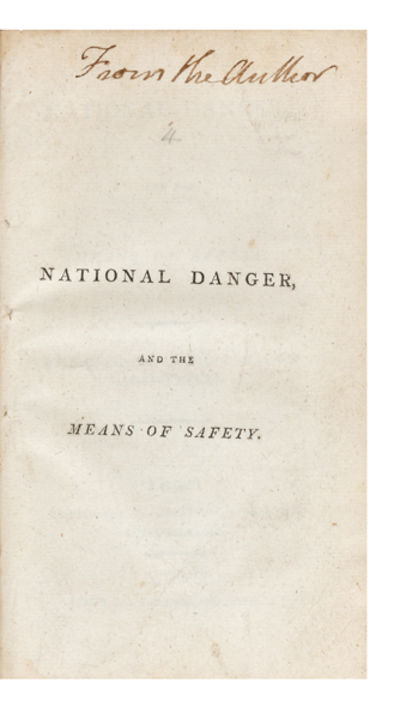 by [YOUNG, Arthur]
2 p.l., 73 pp., one leaf of ads. 8vo, attractive antique calf-backed marbled boards, spine gilt, red morocco lettering piece on spine. London: W. Richardson, 1797. First edition, presentation copy, inscribed on the half-title: "From the Author." Young's trips to France were primarily to look at French farms and farming techniques. His trips also gave him an excellent perspective on the political upheavals of the country. "Young's experiences in France brought about a permanent change in his political views. From being a liberal and a reformer, by 1792 he had become an opponent of the revolution and a conservative in English matters. He was highly critical of the ancien régime but, equally, he attacked the excesses of the revolution, and now he was fearful of the consequences of reform in England, necessary though it was."-ODNB. This work deals with Young's proposal for the formation of a voluntary yeomanry to defend England from any possible French invasion. Fine copy with half-title and final advertisement leaf. Faint dampstaining to final few leaves. (Inventory #: 2705)
$1,250.00 add to cart or Buy Direct from
Jonathan A. Hill, Bookseller
Share this item
Jonathan A. Hill, Bookseller, Inc.
Offered by