A Treatise on Forming, Improving, and Managing Country Residences; and on the Choice of Situations appropriate to every Class of Purchasers, in all which the object in view is to unite in a better Manner than has hitherto been done, a Taste founded in Nature with Economy and Utility, in Constructing or Improving Mansions, and other Rural Buildings, so as to combine Architectural Fitness with Picturesque Effect, and in forming Gardens, Orchards, Farms, Parks, Pleasure Grounds, Shrubberies, all Kinds of Useful or Decorative Plantations, and every object of convenience or beauty peculiar to Country Seats, according to the extent, character, or style of Situations, and the rank, fortune, and expenditure of Proprietors, from the Cottage to the Palace : with an Appendix, containing an Enquiry into the Utility and Merits of Mr. Repton's Mode of shewing Effects by Slides and Sketches, and Strictures on his Opinions and Practice in Landscape Gardening 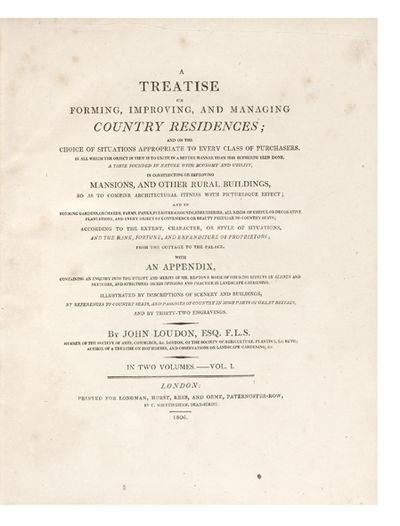 by LOUDON, John Claudius
32 engraved plates (one with an overlaid flap). xii, [41], 353 pp.; 2 p.l., 355-723, [8] pp. Two vols. Large 4to, cont. half-calf & drab boards, (recent) red lettering pieces on spines. London: Longman et al., 1806. First edition and a nice set of the author's first major work. "Loudon's mature statement of his theoretical position, strongly advocating the ideas of Uvedale Price and relentless in his criticism of 'the affectedly graceful' style of Brown. Loudon lays down his standards of beauty in two essays on taste and on painting, and then considers 'the elementary branches of the art of forming a residence' (architecture, agriculture and gardening). Volume two is devoted to picturesque improvement, a term proposed by Loudon to replace 'landscape gardening.' The appendix (which Loudon omitted from the second edition) is a spirited criticism of Repton's writings and his use of slides over sketches. The plates were engraved after Loudon's own drawings."-B. Weinreb, Cat. 54. Garden Architecture and Landscape, 285. Loudon (1783-1843), has been called the "most distinguished gardening author of the age" (by A.J. Downing). He was "a designer of parks and gardens but the chief reason for Loudon's historical importance is undoubtedly the quality and volume of his literary output...this immensely energetic Scotsman published approximately 60 million words on gardening, horticulture, architecture, agriculture, and other related topics. His books, encyclopaedias, and magazines were essential reference books in their day and remain an indispensable source for historians of the period."-The Oxford Companion to Gardens, p. 344. A very good set. Armorial bookplate of George Wilbraham. ❧ Fussell, III, pp. 88-98. (Inventory #: 2723)
$3,500.00 add to cart or Buy Direct from
Jonathan A. Hill, Bookseller
Share this item
Jonathan A. Hill, Bookseller, Inc.
Offered by