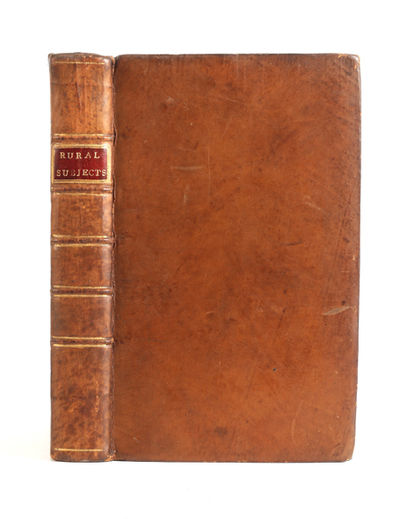 by [FORBES, Francis]
Three folding engraved plates. xvi, 431 pp. 8vo, cont. calf, spine gilt, red morocco lettering piece on spine. London: G. Robinson, 1775. First edition of a somewhat scarce book. "Francis Forbes, who was a great protagonist of the 'New husbandry,' was writing about it at about the same date [as Lord Kames and Cuthbert Clark] because he thought it necessary, and the most agreeable means of satisfying the public of its value was for authors of credit to make known their extensive experience and successful practice of culture for a long series of years. To do this he produced no less than four sizeable books."-Fussell, II, p. 112. The present work was the first in the series to be published. Forbes was an ardent admirer of Tull and a partisan of drill husbandry. The book is divided into four sections: a discussion of how to make fences from field stone, chalk, and wood; the treatment of manures and how to compost; Tull's theories of farming and the uses of the drill plough; and a section on hydraulics and the use of running water (including how to determine its velocity, how to build mills, dams and canals, and the Archimedes screw-pump). A fine copy. The plates depict various farming apparatus, including the drill plough. (Inventory #: 2765)
$1,650.00 add to cart or Buy Direct from
Jonathan A. Hill, Bookseller
Share this item
Jonathan A. Hill, Bookseller, Inc.
Offered by