Consideration of Various Points of Analysis...from the Philosophical Transactions 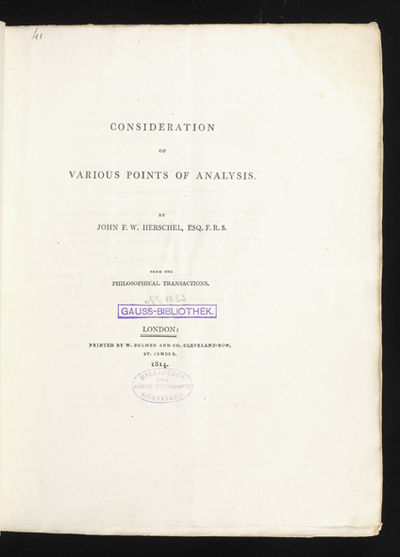 by HERSCHEL, John Frederick William
Several diagrams in the text. 1 p.l., 33 (i.e. 29) pp. Large 4to, orig. blue wrappers, uncut. London: W. Bulmer, 1814. First separate edition, with new pagination. This offprint belonged to Carl Friedrich Gauss, with the "Gauss-Bibliothek" stamp on the title. This copy was no doubt sent by Herschel to Europe's leading mathematician. The present work is an important contribution to mathematical notation by Herschel, who was, with Charles Babbage and George Peacock, a founder of the famous Analytical Society, a group of Cambridge mathematical reformers. They wanted to leave behind the fluxional, Newtonian notation so prevalent in 18th-century Britain and embrace the algebraically based conception of the calculus developed by Lagrange. In this work, Herschel professes "his belief in the fruitfulness of the method of separating the symbols of operation from those of quantity."-S.E. Despeaux, "Very Full of Symbols" in Episodes in the History of Modern Algebra (1800-1950), (2007), ed. by J.J. Gray & K.H. Parshall, p. 54. Fine copy and rare. With the stamp of the Royal Observatory at Göttingen on upper wrapper (with release stamp on front paste-down endpaper) and title. (Inventory #: 3372)
$7,500.00 add to cart or Buy Direct from
Jonathan A. Hill, Bookseller
Share this item
Jonathan A. Hill, Bookseller, Inc.
Offered by