A Catalogue of a Valuable Collection of Greek, Roman, British, Saxon, and English, Coins and Medals, in Gold, Silver and Copper, Antique Curiosities, Gems, and Books, of a Gentleman, deceased; Which will be sold by Auction, by Mr. Gerard, at his House, in Litchfield-Street, St. Anne's, Soho, on Thursday, the 18th of March, 1779, and the Two following days...Catalogues to be had, gratis, at Mr. Gerard's aforesaid 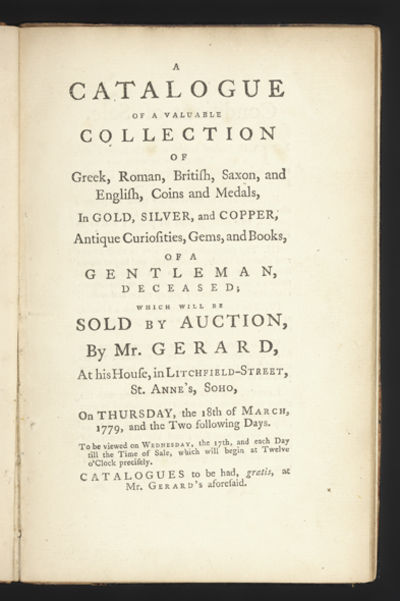 by (AUCTION CATALOGUE: GERARD, John, Auctioneer)
12 pp. 8vo, early half-calf & marbled boards, spine lettered in gilt. [London: 1779]. John Gerard was active as an auctioneer of books, coins, medals, and other antiquities from 1772 until his death in 1794. This is an attractive example of the sort of catalogue he issued every couple of months, interleaved and neatly priced with buyers' names for all but the last thirty lots. The sale consisted of about 300 lots, mostly coins and miscellaneous antiquities, but with a section of 21 lots of books and manuscripts at the end of the first day. Most intriguing is lot 90: "Sebastian Munster's brief Collection of strange and wonderful Things, bound in morocco, bl. let. 1566, - Rybaut's Description of Florida, bl. let. - 1566." Of the first title three editions are recorded - 1572, 1574, and 1576 - all exceedingly rare. The English translation of Jean Ribaut's descriptions of Florida was in fact printed in 1563, and is known in two copies only, at the British Library and Lambeth Palace. At the auction, these two books fetched 12s. 6d. and were acquired by "Money." In excellent condition and rare, as are virtually all Gerard sale catalogues. ESTC locates no copy in the U.S. and only four in the U.K. ❧ Munby & Coral, p. 76. (Inventory #: 3436)
$950.00 add to cart or Buy Direct from
Jonathan A. Hill, Bookseller
Share this item
Jonathan A. Hill, Bookseller, Inc.
Offered by

by (BASILICA OF ST. DENIS)

by (BASILICA OF ST. DENIS)