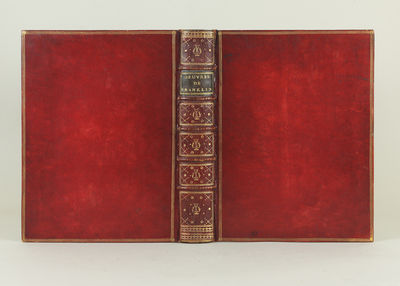 by FRANKLIN, Benjamin
Engraved frontis. port. of Franklin & 12 engraved plates. 2 p.l., xxii, [2], 338 pp.; 2 p.l., xiii, [3], 318, [2] pp. Two vols. in one. Large 4to, cont. red morocco, spine richly gilt, green morocco lettering piece on spine, a.e.g. Paris: Quillau, Esprit, & l'Auteur, 1773. First collected edition in French of Franklin's Experiments and Observations on Electricity; it is described by Printing and the Mind of Man as "the most important scientific book of eighteenth-century America." This is the most complete early edition of Franklin's scientific writings in any language. Our edition is based on the fourth English edition of 1769 and includes correspondence between Dubourg and Franklin on such subjects as ventilation, the art of swimming, inoculation, acoustics, meteors, stoves, the cause of common colds, magnetism and its relations to electricity, and so on which had not previously been published. Fine copy. Bookplates of John Symmons, Edwin B. Holden, and Antoine Bordes. (Inventory #: 3015)
$7,500.00 add to cart or Buy Direct from
Jonathan A. Hill, Bookseller
Share this item
Jonathan A. Hill, Bookseller, Inc.
Offered by