The Rural Economy of Yorkshire. Comprizing the Management of Landed Estates, and the Present Practice of Husbandry in the Agricultural Districts of that County 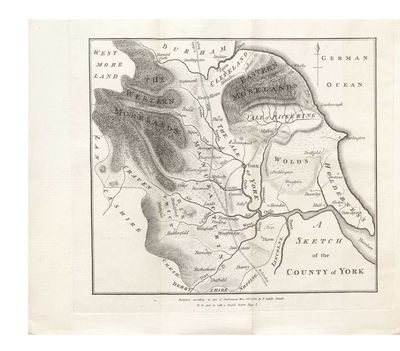 by MARSHALL, William
Two engraved maps (one folding & the other double-page). 4 p.l., 413, [1] pp.; 2 p.l., 366, [6] pp. Two vols. 8vo, orig. blue paper-backed boards (spines & corners a little worn & rubbed), uncut. London: T. Cadell, 1788. First edition. Marshall (1745-1818), wrote a series of studies of farming in various English countries published between 1787 and 1798. The present two volumes were the first in the series which eventually comprised twelve volumes. "Modern agricultural historians have generally held that Marshall's works on English farming are superior to those of his rival, Arthur Young, as they are more systematically arranged and based on a more thorough knowledge of a district by personal residence there. Unlike Young, Marshall was cautious about experimentation, preferring rather to advocate the best practices approved by experienced farmers. On the other hand, he lacked Young's pithy and more readable style, and acquired fewer close contacts with the leading farming figures of the time. Marshall's career, indeed, suffered in some degree from his native bluntness and acid tongue, his pride, and his sensibility to slights. Nevertheless, from the independence of his views arose his remarkably early support for agricultural education, and his belief in the necessity of studying agriculture on a regional basis, both of which were ideas well before their time."-ODNB. Marshall was interested in dialects and he was the first to form a collection of words peculiar to the Yorkshire dialect. It is appended here (pp. 314-66) and contains about eleven hundred words. Very good set. (Inventory #: 2739)
$1,500.00 add to cart or Buy Direct from
Jonathan A. Hill, Bookseller
Share this item
Jonathan A. Hill, Bookseller, Inc.
Offered by