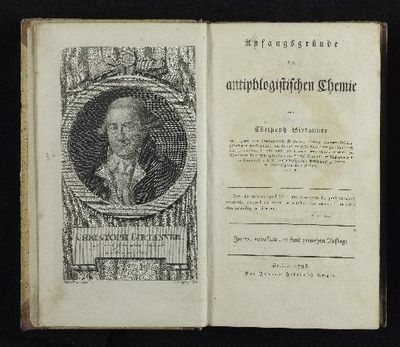 by GIRTANNER, Christoph
Finely engraved frontis. port. of Girtanner. 2 p.l., [7]-16, 466 pp. 8vo, cont. half-sheep & speckled boards (minor rubbing), spine gilt, red morocco lettering piece on spine. Berlin: J.F. Unger, 1795. Second edition, corrected and greatly enlarged, of the first German textbook of chemistry based on the antiphlogistic system. Girtanner (1760-1800), a native of Switzerland, practiced medicine at Göttingen. He had lived in Paris for some time where he got acquainted with the leaders of the new chemistry. In 1791, he published a German translation of the new chemical nomenclature and in 1792 he published the first edition of the present work which for the first time gave a detailed exposition of Lavoisier's system to the German public. In this edition, he frequently refers to objections made by J.B. Richter, who had been converted to Lavoisier's theory after reading Girtanner's book but had raised some pertinent questions. In the preface Girtanner eulogizes Lavoisier whose death had occurred after the publication of the first edition. A fine, fresh, and tall copy. Girtanner's portrait appears in this edition for the first time. ❧ Cole 525. D.S.B., V, p. 411. Neville, I, pp. 525-26. Partington, III, pp. 589-90. (Inventory #: 2498)
$1,750.00 add to cart or Buy Direct from
Jonathan A. Hill, Bookseller
Share this item
Jonathan A. Hill, Bookseller, Inc.
Offered by