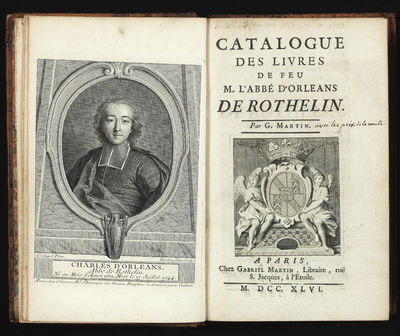 by (AUCTION CATALOGUE: ROTHELIN)
Par G. Martin. Engraved frontis. port. of the collector & engraved vignette with arms on title. xii, xxiv, 618 pp. 8vo, cont. mottled calf (head of spine a bit worn), spine gilt, red morocco lettering piece on spine. Paris: G. Martin, 1746. Rothelin (1692-1744), a younger son of Marquis Henri de Rothelin, a French war hero (see Hoefer), descended from a natural son of François d'Orléans (d. 1548). Rothelin was one of the most eminent French book collectors of the 18th-century; he had his books, many large paper copies, bound by the outstanding binders of the time, such as Boyer, Padeloup and Duseuil; but the most spectacular part of his library was the collection of illuminated and historical MSS, largely from the collection of Nicholas-Joseph Foucault, including the Sherbourne Missal and the Bible of Charles V (Martin's special index of MSS lists 260 lots). Rothelin appears to have been a man of great charm and learning who entertained liberally at his country house near Paris. Voltaire addressed some verses to him, lauding his taste and "esprit si délicat, si sage" (quoted by Bogeng). He was also an outstanding numismatist: his vast collection of Imperial medals and coins was acquired by the King of Spain for 87,000 livres. This is considered to be one of the best sale catalogues compiled by Martin, one of twenty-two with an index. 5036 lots and priced throughout in a contemporary hand. Fine copy. The frontispiece portrait, present in this copy, is often wanting. Armorial bookplate of Baron de Bellet (Jean). Bléchet, p. 120. Grolier Club, Printed Catalogues of French Books Auctions...1643-1830, 82. Peignot, p. 121­"Catalogue estimé." Taylor, Book Catalogues, pp. 14, 190, & 259. (Inventory #: 145)
$1,750.00 add to cart or Buy Direct from
Jonathan A. Hill, Bookseller
Share this item
Jonathan A. Hill, Bookseller, Inc.
Offered by