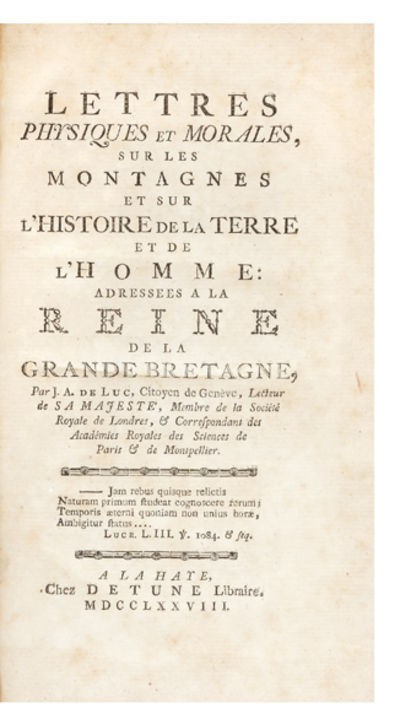 by DELUC, Jean André
xxviii, 226 pp. 8vo, cont. speckled calf (carefully rebacked), orig. leather lettering piece on spine. The Hague: Detune, 1778. First edition, Dutch issue (there is also a Swiss issue published in the same year with a variant imprint). This work consists of a series of letters written by Deluc to Queen Charlotte of England describing his geological researches in Switzerland. On page viii of the Preface, Deluc introduces the term "géologie" for the first time as a more appropriate word than "cosmologie" for knowledge or understanding of the earth and its structure. The text was later incorporated in Deluc's great geological work in six volumes which appeared in The Hague between 1778 and 1780. "Deluc believed that the six days of the Creation were six epochs that preceded the present state of the globe, which began when cavities in the interior of the earth collapsed and lowered the sea level, thereby exposing the continents. There was thus a distinction between an older creative, or antediluvian, period and a newer, or diluvian, period."-D.S.B., IV, p. 28. Very good copy. Engraved armorial bookplate of the Earl of Guildford. (Inventory #: 3589)
$2,500.00 add to cart or Buy Direct from
Jonathan A. Hill, Bookseller
Share this item
Jonathan A. Hill, Bookseller, Inc.
Offered by