Account of a Series of Experiments, shewing the Effects of Compression in modifying the Action of Heat. Read in the Royal Society of Edinburgh, June 3. 1805 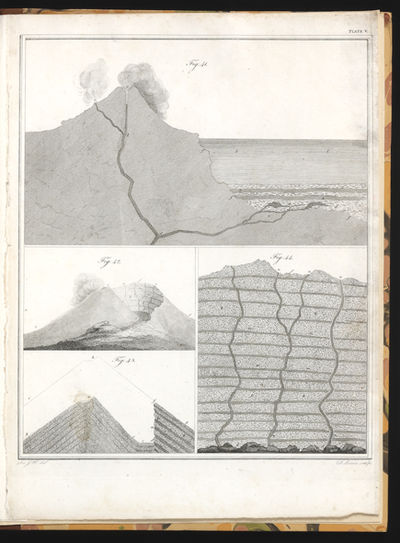 by HALL, Sir James, Bart
Five engraved plates & tables in the text. 1 p.l., iii, 115 pp. Large 4to, modern calf-backed marbled boards (minor foxing, faintest dampstaining to outer margins in second half of book). [Edinburgh: 1805]. First separate printing, later published in the Transactions of the Royal Society of Edinburgh. "This important memoir, which made the author the founder of experimental geology, contains his classic experiments undertaken in support of the Huttonian Theory."-Sotheran, Vol. II, 8816. "Hall followed experimental methods; he selected different varieties of ancient basalt and lavas from Vesuvius and Etna, reduced them to a molten state, and allowed them to cool. At first he arrived only at negative results, as vitreous masses were produced; but he then retarded the process of cooling, and actually succeeded in obtaining solid, crystalline rock-material. By regulating the temperature and the time allowed for the cooling and consolidation, Hall could produce rocks varying from finely to coarsely crystalline structure. And he therefore proved that under certain conditions crystalline rock could, as Hutton had said, be produced by the cooling of molten rock-magma...These results were afterwards confirmed by other experimentalists. Thus Werner's theory that crystalline rock represented in all cases a precipitate from water was shown to be inadequate, and it was incontestably proved that crystalline rock might originate from molten rock when slowly cooled under pressure."-Zittel, pp. 73-74. Very good copy. ❧ Adams, The Birth and Development of the Geological Sciences, p. 239. D.S.B., VI, pp. 53-56. Geikie, The Founders of Geology, pp. 317-25. (Inventory #: 3565)
$3,500.00 add to cart or Buy Direct from
Jonathan A. Hill, Bookseller
Share this item
Jonathan A. Hill, Bookseller, Inc.
Offered by