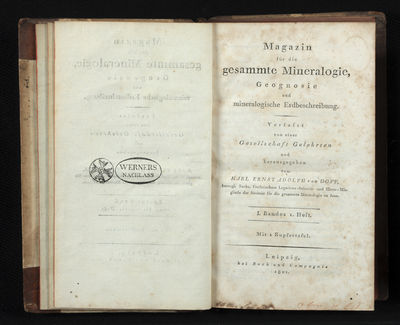 by HOFF, Carl Ernst Adolf von, ed
Four folding engraved plates. Four parts in one vol. [all published]. 8vo, cont. half-sheep & paste-paper boards (occasional minor dampstaining, first 40 leaves with two unimportant wormholes in lower outer margin), spine gilt, black leather lettering piece on spine. Leipzig: Roch, 1801. First edition, all published, of this important mineralogical and geological journal; this set comes from the library of the great geologist and mineralogist Abraham Gottlob Werner (1749-1817), professor at the famous Freiberg Bergakademie. According to D.S.B., VI, p. 456, this is the first "special periodical for geology and mineralogy...Despite the recognition it received, it ceased publication on the death of its publisher." Some of the contributors include Ernst Friedrich von Schlotheim, Reuss, Vauquelin, Klaproth, Wiedemann, and other notable scientists. This journal offers a remarkable view of the ferment which the fields of geology and mineralogy were undergoing during this period. Apart from the scholarly articles, Hoff also publishes "Letters to the Editor," notes of current activities, notices of position changes in institutions, obituaries, reviews of recently published books and articles, and accounts of the trade amongst collectors of minerals. Hoff (1771-1837), a distinguished diplomat in Gotha's civil service, also "accomplished first-rate work in a totally different field - scientific research, notably in geology and geography. Indeed, he introduced a new epoch of geological study which continues still."-ibid., pp. 455-58. Very good set. Stamp on verso of first title "Werners Nachlass.". (Inventory #: 2964)
$9,500.00 add to cart or Buy Direct from
Jonathan A. Hill, Bookseller
Share this item
Jonathan A. Hill, Bookseller, Inc.
Offered by