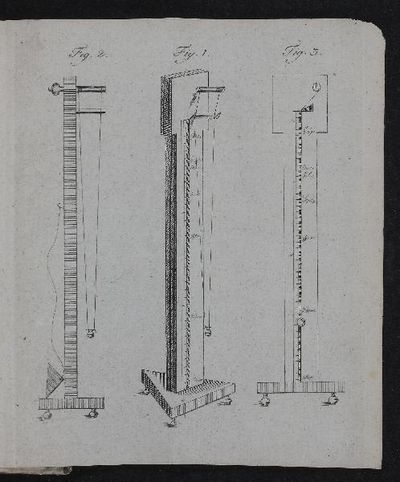 by [BUERJA, Abel]
One folding engraved plate. 23 pp. Small 8vo, cont. speckled boards (upper outer corner of each cover rounded). Berlin: Petit & Schöne, 1790. First edition of this extremely rare and early work on the metronome; OCLC does not locate a copy in the U.S. Bürja (1752-1816), professor of mathematics at the Berlin Military Academy and a member of the Royal Academy of Sciences at Berlin, wrote many books on mathematics, hydraulics, and scientific instruments. He was the first to call into question the rigor of Lagrange's exposition of the calculus. This is an early and noteworthy book on the metronome of the author's own invention. The development of a reliable instrument to denote the speed at which a musical composition is to be performed took several centuries to be realized. Galileo left a scheme for a pendulum time-marker in his papers and in the 17th and 18th centuries many scientists, instrument makers, and musicians including Thomas Mace, Etienne Loulié, Joseph Sauveur, and John Harrison all developed pendulums to measure musical time. The present work describes Bürja's experiments with a weighted pendulum of variable length which is depicted on the folding engraved plate. The metronome was only perfected in the beginning of the 19th century by Maelzel and Winkel. Beethoven was the first important composer to employ the instrument. Fine copy. ❧ Cajori, A History of Mathematics, pp. 155 & 258. MMG, Vol. IX, p. 234. New Grove, Vol. 12, pp. 222-23. (Inventory #: 2633)
$4,950.00 add to cart or Buy Direct from
Jonathan A. Hill, Bookseller
Share this item
Jonathan A. Hill, Bookseller, Inc.
Offered by


(click for more details about [From upper wrapper]: Backworks? Catalogue No. B, $1. Performance: Photographs of a Decade 1959-69)

[From upper wrapper]: was ist Backworks


(click for more details about [From upper wrapper]: was ist Backworks)
View all from this seller>