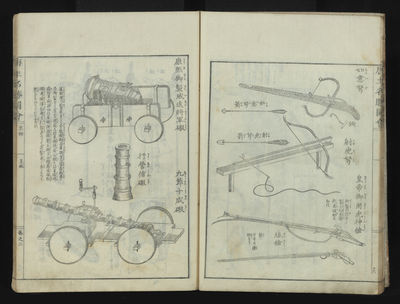 by OKADA, Gyokuzan
About 250 black & white woodcuts (about 170 are double-page, a few in red ink). Six vols. Large 8vo, orig. wrappers (quite rubbed, occasional unimportant worming), orig. block printed title label on each upper cover, new stitching. Kyoto: 1806. First edition of this finely illustrated work of the landmarks, famous sights, art works, and the chief cultural buildings of China in the late 18th century. The illustrators are the well-known Japanese artists Okada Gyokuzan (d. 1808), Yugaku Oka (1762-1833), and Toya Ohara (1771-1840). Okada was the first to create such detailed woodcuts in Japan. In the meisho travel guide tradition, which had become so popular in Japan at this time, the author discusses and the artists depict in finely detailed woodcuts, many of which are double-page, the historical landmarks, topographical views, palaces, and archaeological and sacred sites of China during the Qing Empire. Maps of China and Korea are included as well as many city views including those of Beijing, the Forbidden City, and the Great Wall's gates. Additionally, there are illustrations of ceremonial costumes and uniforms, musical instruments, measuring instruments, flower shows, seating arrangements and menus for banquets, government ceremonies with the Emperor, porcelains, the five holy Buddhist mountains, members of the royal family, Tiananmen square, markets with merchants at work, water clocks, parades, etc. There are also many "daily life" woodcuts of the people, their clothes, military formations, weapons, and regular activities. The astronomical observatory at Beijing, established by the Jesuits Schall and Verbiest, is depicted along with its instruments and globes. This work reflects the great veneration which the Japanese educated classes had towards Chinese culture. Nice set. (Inventory #: 3128)
$15,000.00 add to cart or Buy Direct from
Jonathan A. Hill, Bookseller
Share this item
Jonathan A. Hill, Bookseller, Inc.
Offered by