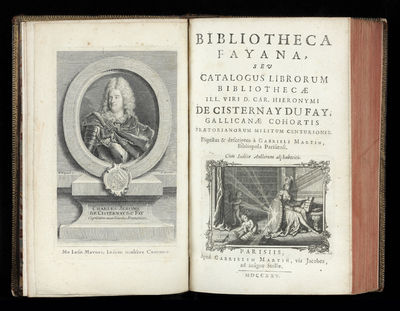 by (AUCTION CATALOGUE: DU FAY)
Engraved frontis. port. of the collector & an engraved vignette on title. 6 p.l. (incl. port.), xxii, 450, 107*, [1] pp., [27] leaves of index. 8vo, cont. mottled calf (corners a bit worn), spine richly gilt, red morocco lettering piece on spine. Paris: G. Martin, 1725. One of the finest French 18th-century collections; the sale catalogue of the library of Du Fay (1662-1723), is considered to be the best of those compiled by Gabriel Martin, who made Paris the international center for the sale of rare books by auction. Du Fay, after losing his leg in the bombardment of Brussels in 1695, devoted the rest of his life to collecting rare books and manuscripts. Buying from all the leading dealers in Europe, he formed a superb museum of literary rarities. Du Fay was advised by his friend and notable book collector Michel Brochard, professor at the Collège Mazarin, who was the author of the notice in Latin preceding the catalogue. Du Fay became an outstanding connoisseur, a friend of eminent savants and authors, including Fontenelle, and was in contact with the best booksellers of Europe. Many of his books ultimately found their way to Count d'Hoym. Priced throughout in a contemporary hand. 4414 lots, including early MSS. and bindings. Very nice copy with the rare portrait. From the library of Jean Viardot. ❧ Gustave Brunet, Dictionnaire de Bibliologie Catholique, col. 451. Grolier Club, Printed Catalogues of French Book Auctions...1643-1830, 22. Peignot, p. 96-"Catalogue bien fait d'une bibliothèque riche et bien composée." Pollard & Ehrman no. 269. Taylor, Book Catalogues, pp. 207, 226, & 239. (Inventory #: 3358)
$2,950.00 add to cart or Buy Direct from
Jonathan A. Hill, Bookseller
Share this item
Jonathan A. Hill, Bookseller, Inc.
Offered by

One Hundred Meals between Rome and Berlin


(click for more details about Deflation)
View all from this seller>