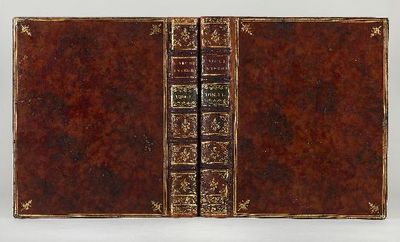 by LE SEUR, Thomas & JACQUIER, François
Engraved arms of Duke Ferdinand on titles & eleven folding engraved plates. xii, 548, [1] pp.; vii (first leaf a blank), 591 pp. Two vols. 4to, cont. mottled sheep (joints and head & tail of spines with several careful repairs), gilt fleurons in each corner of covers, triple gilt fillet round sides, spines gilt, red & green morocco lettering pieces on spines. Parma: [pasted-over label]: "Chez les Freres Faure Libraires de Son Altesse Royale," 1768. First edition and a fine large and thick paper set of this work which is now scarce on the market. This is one of the major works in the history of calculus, written by the editors of the Jesuits' edition of Newton's Principia. The authors were the principal expositors of Newtonian mathematics and physics in Italy. They resided in Parma from 1763 to 1773 as tutors to the young Duke Ferdinand were intimate friends of many of the leading scientists of the time including Clairaut, Boscovich, and Mme. du Châtelet. (Inventory #: 2011)
$6,500.00 add to cart or Buy Direct from
Jonathan A. Hill, Bookseller
Share this item
Jonathan A. Hill, Bookseller, Inc.
Offered by

Wooden double-sided kanban (shop signboard) for the "Takami tokei ten," an eyeglass & watch store, with "Megane kakushu" ("Variety of Eyeglasses") in the largest characters on the board


(click for more details about Wooden double-sided kanban (shop signboard) for the "Takami tokei ten," an eyeglass & watch store, with "Megane kakushu" ("Variety of Eyeglasses") in the largest characters on the board)
View all from this seller>