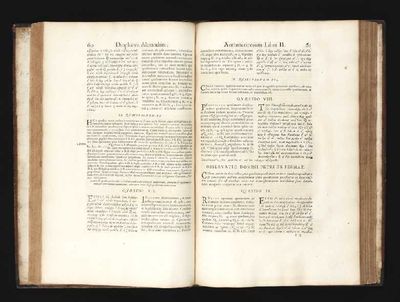 by DIOPHANTUS, of Alexandria
Cum Commentariis C.G. Bacheti...& observationibus D.P. de Fermat...Accessit Doctrinae Analyticae inventum novum, collectum ex variis eiusdem D. de Fermat Epistolis. Large engraved vignette on title, several finely engraved headpieces & initials, & a few woodcut diagrams in the text. 6 p.l., 64, 341, 48 pp., one leaf of errata. Folio, cont. speckled calf (carefully rebacked with the orig. spine laid-down, light browning as usual, two corners discretely repaired), spine richly gilt. Toulouse: B. Bosc, 1670. First edition, and a very fine and fresh copy. This edition is the first to contain Fermat's observations on the Arithmetica of Diophantus, the first systematic treatise on algebra; it also contains (on H3r) the first statement of the celebrated "Last Theorem" which Fermat originally wrote by hand in the margins of his copy of Bachet's edition of Diophantus (1620). This theorem is the most famous problem in mathematics and remained unsolved for over 325 years until its recent solution by Andrew Wiles. But it should be remembered that Wiles was able to resort to sophisticated 20th-century techniques not available to Fermat. The exact form of Fermat's proof, if indeed he had a genuine one, thus remains one of the great unsolved puzzles of mathematics. The 1670 edition was published posthumously by Fermat's son Clement Samuel. It is based on his father's annotated copy of the Bachet edition of 1621 and contains a major part of Fermat's work on number theory, a branch of mathematics that he virtually created. A nice copy with the extremely rare errata leaf. ❧ Smith, Rara Arithmetica, p. 348. (Inventory #: 3548)
$65,000.00 add to cart or Buy Direct from
Jonathan A. Hill, Bookseller
Share this item
Jonathan A. Hill, Bookseller, Inc.
Offered by