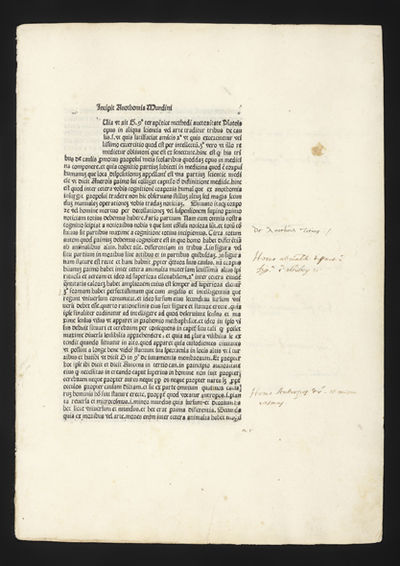 by MUNDINUS (or MONDINO DEI LUZZI)
[22] leaves, Gothic type, 43 lines. Folio (301 x 213 mm.), disbound (some worming towards end). [Padua (not Pavia): Pierre Maufer, about 1475]. First edition, a remarkable discovery of the third known copy of the true first edition of the first modern book devoted solely to anatomy. The other two surviving copies are in the Biblioteca Corsiniana (Rome) and the Biblioteca Comunale (Viterbo). The rarity of this book is well-known: it is revealing that Castiglioni, Choulant, and Garrison all cite the 1478 edition as the first printing. Its influence was great: "The first outstanding anatomist worthy of the name...the Anathomia of Mondino was the most used anatomical text up to the end of the sixteenth century, probably because it contained the most important technical indications in brief and concise form."-Castiglioni, A History of Medicine, pp. 341-43. Mondino (ca. 1275-1326), a native of Bologna, was the son of an apothecary and the nephew of a professor of medicine. He attended the University of Bologna where he studied under Alderotti (Thaddeus of Florence), an early dissector, and took his medical degree in 1300. Mondino soon became a professor of medicine at the university. "Mondino's chief work is his compendium of anatomy, Anatomia Mundini, completed in 1316, which made him, in Castiglione's [sic] words, 'the first outstanding anatomist worthy of the name.' Mondino's book dominated anatomy for over two hundred years. The major reason for Mondino's great popularity was the simplicity, conciseness, and systematic arrangement of his book, which is divided into six parts: (1) an introduction to the whole body and a discussion of authorities; (2) the natural members including the liver, spleen, and other organs in the abdominal cavity; (3) the generative members; (4) the spiritual members, the heart, lungs, trachea, esophagus, and other organs of the thoracic cavity up to the mouth; (5) the animal members of the skull, brain, eyes, ears; and (6) the peripheral parts, bones, spinal column, extremities. This organization was not the result of any philosophical approach to the subject but rather derived from the necessity of dissecting the most perishable organs first... "Mondino should be regarded as the restorer of anatomy if only because his popular textbook and his experimental teaching were instrumental in preparing the revival of the subject. His text was the first book written on anatomy during the Middle Ages that was based on the dissection of the human cadaver; his efforts consolidated anatomy as a part of the medical program at Bologna and encouraged further study. His book also dominated the teaching of anatomy, and no real improvements were made upon it until 1521, when Berengario da Carpi wrote his famous commentary on Mondino."-D.S.B., IX, pp. 468-69. "Mondino's book soon became a classic text; he was venerated soon after his death as a divine master and anyone who was found differing from his book was regarded as monstrous. For three centuries the lecturers on anatomy were required to use his book in their teaching, as may be seen in the statutes of many medical schools."-Castiglioni, op. cit., pp. 344-45-(& see the detailed account of the contents of this book and methods of dissection which it reveals on pp. 341-45). A very fine copy with all edges uncut and preserved in a slipcase. Two contemporary annotators have made a number of neat comments in the wide margins. This copy was clearly removed from a sammelband. The final four leaves have some worming, becoming increasingly more pronounced (but not at all offensive) touching the text of the final three leaves. ❧ Choulant-Frank, pp. 88-96. Garrison-Morton 361-(describing the 2nd edition of 1478)-"The first modern book devoted solely to anatomy, written for his students in 1316. Mundinus re-introduced human dissection, which had been neglected for 1500 years before him; he was the most noted dissector of his period." Garrison, History of Medicine, pp. 160-61. GKW M25666-(citing Pavia in error). ISTC im00871200. Klebs 688.1. Sarton, III, Pt. I, p. 843-"In spite of his personal observations, Mondino was almost entirely dependent upon Galen and Theophilos and upon Arabic authorities.". (Inventory #: 3381)
$375,000.00 add to cart or Buy Direct from
Jonathan A. Hill, Bookseller
Share this item
Jonathan A. Hill, Bookseller, Inc.
Offered by