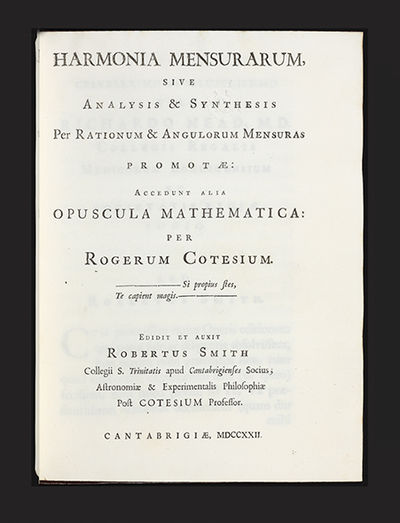 by COTES, Roger
One engraved plate & numerous woodcut diagrams in the text. 10 p.l., 249 pp.; 1 p.l., 125, [1] pp. Two parts in one vol. Large 4to, cont. speckled calf (head cap a bit chipped), triple gilt fillet round sides, spine gilt, red morocco lettering piece on spine. Cambridge: 1722. First edition. "This most important book by Cotes was published posthumously by his friend and successor at Trinity College, Robert Smith. Professor Morgan calls it 'the earliest work in which decided progress was made in the application of logarithms and of the properties of the circle to the calculus of fluents.' It is also the first complete treatise on the integral calculus and first contains the well-known theorem in trigonometry known as the 'Cotes' theorem.' The second part has miscellaneous writings by Cotes, including 'De Methodo Differentiali Newtoniana,' 'De Descensu Gravium,' 'De Motum Pendulorum in Cycloide,' 'De Motu Projectilium,' etc."­Babson, Supp., p. 29. Of considerable additional interest is the first printing, on page 22, of "Cotes's Rule" which "can be (and has been) read as recommending a weighted mean, or even as an early appearance of the method of least squares."­Stigler, The History of Statistics, p. 16. Very fine and large copy with half-title. ❧ D.S.B., III, pp. 430-33. (Inventory #: 900)
$6,500.00 add to cart or Buy Direct from
Jonathan A. Hill, Bookseller
Share this item
Jonathan A. Hill, Bookseller, Inc.
Offered by

One Hundred Meals between Rome and Berlin


(click for more details about Deflation)
View all from this seller>