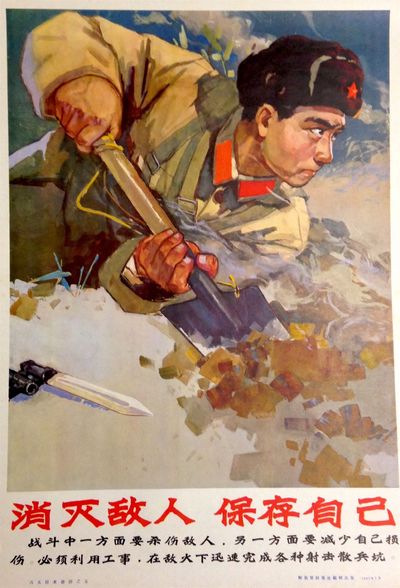 [China]: Jiefangjun haibaoshe, 1965. Poster. 21x30 inch poster depicting a determined-looking soldier sprawled forward on the ground with a shovel in his hands, beginning to dig, while a bayonet rests on the ground beside him. Text below goes on to say "In the midst of battle one must on the one hand kill and injure the enemy, while on the other hand working to reduce the damage inflicted upon oneself. One must take advantage of fortifications, and under enemy fire, quickly complete various types of foxholes." Published by the People's Liberation Army in July, 1965 as part of a series on strategy, before the Cultural Revolution. Fine condition; with only a couple small spots of foxing in the margin. Large numbers of the posters in this series were printed, but they rarely survive in such clean condition. (Inventory #: 210280)
$175.00 add to cart or Buy Direct from Bolerium Books
Share this item