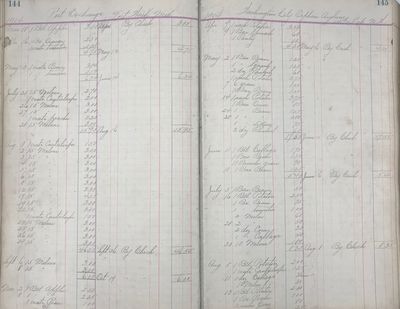 1941. Two manuscript account ledgers. Folio, 544pp.; 472 pp. Worn brown leather. Entries for the W.S. Anderson Company of Washington D.C., wholesale produce dealers, covering their business dealings from 1900-1941. One ledger includes the accounts held with various suppliers, people and firms for whom they acted as commission agents in the south and mid-west, including New York, Ohio, Maryland, Virginia, North and South Carolina, Georgia, and Florida, showing the diversity of places and produce distributed through rail in this period. The other ledger is filled with names of local customers: Academy of Sacred Heart, Arlington Hotel, Bancroft Hotel, Co. A Hospital Corps, Ebbitt House, Georgetown College, Gonzaga College, Maryland Agricultural College and University Club, Washington City Orphanage, etc. The W.S. Anderson Company, successors to E.E. Anderson & Bro., established in 1865, specialized in Southern Fruits and Vegetables, as well as foreign and domestic produce in Washington, D.C. for several decades, according to an ad they ran in the Georgetown College Journal in 1897. (Inventory #: 61494)
$450.00 add to cart or Buy Direct from
Bartleby's Books
Share this item

Acts and Joint Resolutions of the General Assembly of the State of South Carolina, Passed at the Regular Session of 1869-'70; Part II, Containing the Code

Columbia, SC : John W. Denny, printer to the state , 1870
(click for more details about Acts and Joint Resolutions of the General Assembly of the State of South Carolina, Passed at the Regular Session of 1869-'70; Part II, Containing the Code)