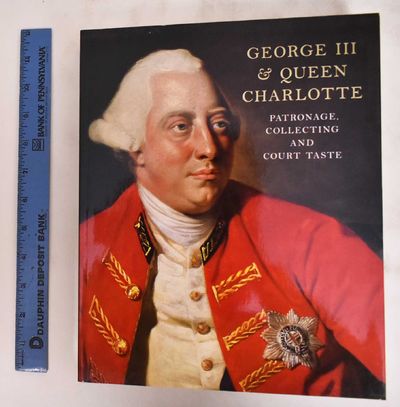 by Roberts, Jane
London: Royal Collections Publications, Ltd, 2004. Softcover. VG (light scuffing to corners and wraps). Color illustrated wraps with French flaps; 407 pp. 485 illustrations, 30 figures, genealogical tables. Contents as follows: Foreword by HRH The Prince of Wales -- King, queen, and family : essay / by Christopher Lloyd. Portraits: oils, pastels, drawings and prints (nos. 1-2) ; Miniatures (nos. 22-55) ; Royal art (nos. 56-84) -- The king's buildings. The king and his architects (nos. 85-101) ; The royal residences (nos. 102-142) -- Patronage and collecting : essay / by Jonathan Marsden. Paintings (nos. 143-165) ; Drawings, watercolours and gouaches (nos. 166-194) ; Books and binding (nos. 195-251) ; Sculpture (nos. 252-256) ; Furniture (nos. 257-292) ; Time-keeping and science (nos. 293-308) ; Ceramics (nos. 330-329) ; Silver-gilt (nos. 330-391) ; Objets de vertu (nos. 392-420) ; Gems, jewels and medals (nos. 421-456) ; Textiles and fans (nos. 457-472) ; The wider world (nos. 473-485) -- Appendix: The disperal of Queen Charlotte's property -- Bibliography and abbreviations -- Concordances -- Family trees -- Index -- Acknowledgements and list of contributors. The 'madness' of George III is the one fact about the King that everybody knows. Some might also say that George III 'lost' the American colonies. Few would be able to add that George III founded the Royal Academy of Arts, that he was a patron of Samuel Johnson and the astronomer William Herschel, and a king who 'gloried in the name of Briton'. Among his contemporaries George III was noted as an outstanding bibliophile and a renowned connoisseur of music, science, painting and architecture. ... Published to coincide with the major exhibition at The Queen's Gallery, Buckingham Palace, George III & Queen Charlotte: patronage, collecting and court taste reconsiders the role of George III, Queen Charlotte and their family in encouraging the arts within the court and in society as a whole during the 50 years of the King's reign. Illustrated by a superb range of works of art in the Royal Collection, the book reveals aspects of George III as father, monarch, and man of letters that have generally been overlooked, and demonstrates his true importance as one of the most wide-ranging, influential and far-sighted collectors of his day. It is an important contribution to studies of the fine and decorative arts in the Georgian period, and will be an essential source of referene for both academics and collectors. -- Book jacket. (Inventory #: 107067)
$40.00 add to cart or Buy Direct from Mullen Books
Share this item