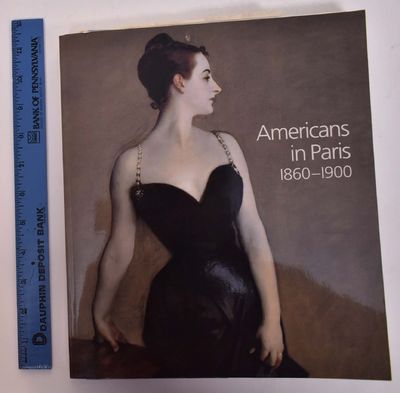 by Adler, Kathleen and Erica E. Hirshler and H. Barbara Weinberg, et al.
London: National Gallery of London, 2006. Softbound. VG. One copy has owner's writing inside front cover.. Color illustrated wraps. 288 pp. Profusely illustrated in color. A wonderful study with new scholarship and insights. Lists, illustrates and annotates over 100 works by your favorite artists, with many pictures drawn from private collections. As the center of the art world in the late nineteenth century, Paris was a magnet for American art students and artists. They flocked to the studios of French artists like Jean-Leon Gerome, William Bouguereau, and others, dreamed of showing their work at the annual Paris Salon, and watched intently as new styles such as Impressionism began to take hold. Hardly an American painter was unaffected by developments in Paris, and even those who chose not to study there wanted their work to be affirmed by French audiences and taste makers. This beautifully illustrated book traces the role of American artists in Paris from the Salon des Refuses, in 1863, to the emergence of a uniquely American style of painting at the turn of the century. It includes iconic images by John Singer Sargent, James Abbott McNeill Whistler, Mary Cassatt, and Winslow Homer, and by many other artists whose names and work were more widely known then than now. Engaging essays written by notable scholars explore why artists were drawn to Paris, how they responded to what they found there, and what they retained of their experience. In addition, the significance of the Expositions Universelles, the French view of American artists in Paris, and the role these artists played in shaping the great American collections of modern French painting are discussed. Featuring more than 100 paintings, the essays are followed by artists' biographies, an illustrated, annotated list of works, and a complete bibliography. (Inventory #: 102712)
$29.99 add to cart or Buy Direct from Mullen Books
Share this item