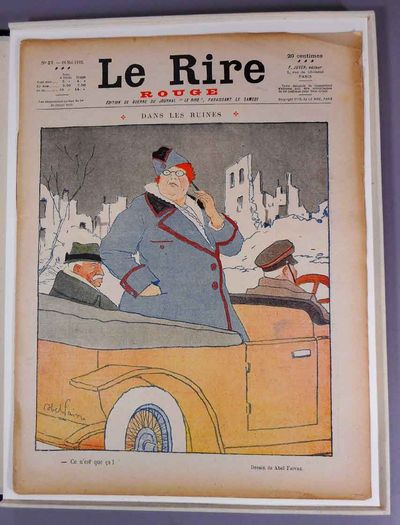 by [Wharton, Edith and Walter Berry]
Paris: Felix Juven, 1915. Single issue of French humor magazine, this issue "Dan Les Ruines" with a color chromotypograph caricature by Abel Faivre of Edith Wharton and Walter Berry in the back of their chauffeur-driven car, touring the front with the caption "Ce n'est que ca!" Single Page size: 12-1/4 x 9-1/8 inches; 12pp; wrappers, pages a browned and ruffled at edges, some chipping at edges, but generally sound and good, housed in black cloth over boards custom-made clamshell box with gilt stamped leather label on spine. Hermione Lee, in her biography of Edith Wharton, notes that on Wharton's and Berry's third journey to the front (1915), they were accompanied by war cartoonist Abel Faivre, who did the "brilliant and unkind caricature" that appears on the cover of issue No. 27. Wharton is standing in the back of the car, gazing through a lorgnette, while Walter with hat and white moustache, sits glowering next to her, with the back of the chauffeur's head visible against the distant outline of bombed and ruined homes. The caption, "Ce n'est que ca!" may be translated, "Is that all?' but also could be translated as "Why make such a fuss." This probably refers to the quote by Marie Antoinette during the Revolution, "S'ils n'ont pas de pain, qu'ils mangent de la brioche." The unkind caricature and the satirical reference to a privileged woman with no understanding of the problems of the average man did not vex Wharton. Rather, Lee cites one of Wharton's letters in which she describes the caricature with mild amusement. The caricature is reproduced in black and white in the Lee biography. See Lee, Hermione. EDITH WHARTON, pp. 484-486. (Inventory #: 11190)
$150.00 add to cart or Buy Direct from
Priscilla Juvelis
Share this item

Since man began to eat himself. Six authors, six etchings and one drawing in seven plates by Warrington Colescott

Mt. Horeb, WI : The Perishable Press , 1986
(click for more details about Since man began to eat himself. Six authors, six etchings and one drawing in seven plates by Warrington Colescott)
View all from this seller>