Alongside;" being notes suggested by "A New England Boyhood" of Doctor Edward Everett Hale 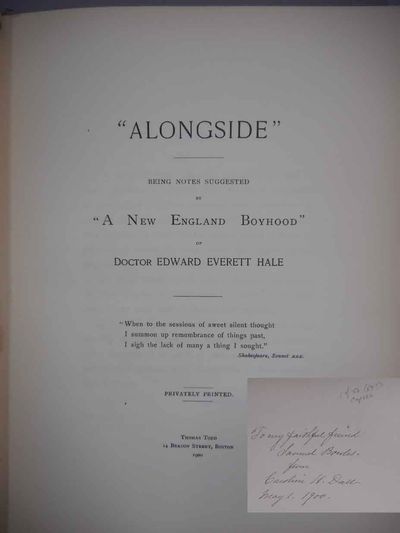 by [Dall, Caroline Wells Healey]
Boston: Privately Printed Thomas Todd, 1900. First Edition, inscribed on ffe by the author to Samuel Bowles and dated May 1, 1900, one of 50 (or 57) copies (notation on AAS copy cites 57 copies printed but colophon states 50), of this privately limited edition, a memoir of the author's early childhood as daughter of Mark Healey, a Boston banker (President of The Merchant's Bank). Page size: 9-1/4 x 7 inches; [i-iiil] 100pp. + frontis half-tone engraving of medallion portrait of Mark Healey at age 84 by Edward Spring. Bound: grey cloth over boards with title stamped in gold gilt on front panel, 3 parallel vertical rules on either side of front panel, spine a bit sunned, else near fine. The memoir cites reformers such a Elizabeth Palmer Peabody and Maria Weston Chapman, amid the names of many Boston Brahmins. An attendee of Margaret Fuller's "Conversations" her publication on the subject provides the only first-hand account of this important feminist event. Dall became an important figure in the organization of the woman's rights movement in Massachusetts. A devoted feminist (long before common use of the term) prompted her book, THE COLLEGE, THE MARKET, AND THE COURT; OR WOMAN'S RELATION TO EDUCATION, LABOR, AND LAW (1867) which went beyond the suffrage movement, calling for removal of educational and legal disabilities based on sex and anticipated Charlotte Perkins Gilman's WOMEN AND ECONOMICS (1898) by 31 years. This charming memoir is a rare look into the privileged youth of one of one of the major women reformers of the 19th century, who helped shape today's world. First editions of Dall's works are quite scarce with none located online at this time - although reprints abound. NAW I, pp. 428-9. (Inventory #: 11211)
$750.00 add to cart or Buy Direct from
Priscilla Juvelis
Share this item

Albuquerque, NM 2020
(click for more details about That Nature Is a Heraclitean Fire and the Comfort of the Resurrection by Gerard Manley Hopkins)
View all from this seller>