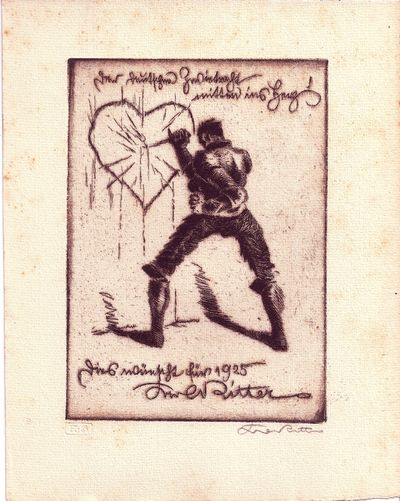 by (BOOKPLATES) GRAF, Heinrich (editor)
Munich: Heinrich Graf, 1923 - 1925. First Edition. Wraps. Occasional foxing. Near Fine and very scarce, especially when complete. Four quarto (7-5/8" x 10") volumes consisting of 4 vellum-backed cloth folders with printed paper labels on the front covers and each holding a paper folder consisting of a color title page and a colophon page containing within engraved bookplates, each SIGNED by the artist. There are a total of 40 SIGNED original engraved bookplates by artists such as Willy Geiger, Erich Buttner, Rudolf Hesse, Hermann Bauer, Eduard Winkler, Richard Klein, Seche, Karl Ritter, and others. Of a total of only 30 copies, this is #VIII of 10 numbered copies SIGNED by Graf and is the Austrian painter and graphic artist Leo Adler's copy with two of the colophons inscribed to him by Graf and with the first three colophons incorporating Adler's engraved bookplate as part of the page. The fourth portfolio does not have an inscription or engraving and is marked #X instead of VIII. An extra signed engraving is included. (Inventory #: 018388)
$3,500.00 add to cart or Buy Direct from Charles Agvent
Share this item