The Building of Elizabethan and Jacobean England 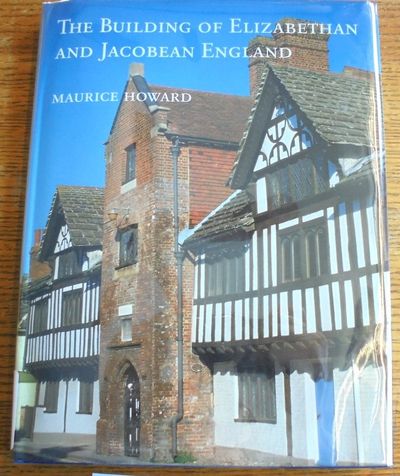 by Howard, Maurice
New Haven and London: The Paul Mellon Centre for Studies in British Art / Yale University Press, 2007. Hardcover. VG (Ex-art library, with spine label, i.d. marks on book block edges and outermost pages, otherwise crisp and clean.). Blue cloth, black & color illus. dust jacket in mylar cover, 227 pp., color and BW illus. "In the 1530s the dissolution of the monasteries in England resulted in great destruction of the built fabric of the country but also the beginning of new initiatives. In the following century, former monasteries were adapted to a variety of uses in both public and private buildings: royal palaces and country houses, town halls and schools, almshouses and refashioned parish churches. England built no new towns but the urban environment changed rapidly to reflect the needs of both national and local government. Patrons spent sometimes wisely, sometimes extravagantly, in managing a balance between their own domestic projects and sponsoring civic buildings that promoted their charitable image in post-Reformation society. This transformation of the country's stock of buildings was accompanied by a new language both of word and vision. ... This book shows how changes of style in architecture emerged from the practical needs of building a new society through the image-making of public and private patrons in the revolutionary century between Reformation and Civil War." (dj). (Inventory #: 157596)
$46.00 add to cart or Buy Direct from Mullen Books
Share this item