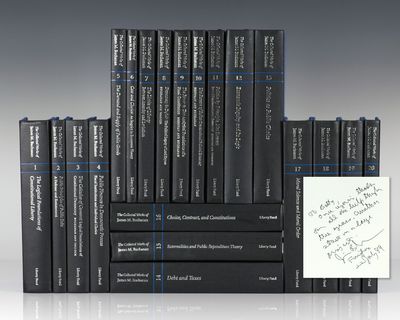 by Buchanan, James M
Indianapolis: Liberty Fund, 1999-2002. First editions of each of volume that comprise the collected works of Nobel Prize-winning economist James M. Buchanan's papers. Octavo, original half cloth, 20 volumes. Eighteen of the twenty volumes are warmly inscribed in the year of publication by James Buchanan to his assistant of 46 years, Betty H. Tillman, the second person Buchanan phoned on October 16, 1986 (after his wife, Ann) when he learned he had been awarded the Nobel Prize in Economics (see Buchanan, 'Notes on Nobelity,' in Better than Plowing: And Other Personal Essays, University of Chicago Press 1992). Only Volumes 11 and 20 are unsigned. Each are in very good to near fine condition; dust jackets were not issued for these volumes.   James M. Buchanan is responsible for the rebirth of political economics as a scholarly pursuit (Boettke, 1998). Buchanan has done more than most to introduce ethics, legal, political, and social thinking into economics. Consequently, he maintains that public policy cannot be considered in terms of distribution, but instead should question rules that engender a pattern of exchange and distribution (Swedberg, 1990). Buchanan distinguishes between politics and policy. Politics is about the rules of the game, while policy is focused on strategies that players adopt within a given set of rules. The Economic Journal noted in 2006 that "Questions about what are good rules of the game are in the domain of social philosophy, whereas questions about the strategies that players will adopt given those rules is the domain of economics, and it is the play between the rules (social philosophy) and the strategies (economics) that constitutes what Buchanan refers to as constitutional political economy. (Inventory #: 26023)
$4,200.00 add to cart or Buy Direct from
Raptis Rare Books
Share this item