Travels to the Source of the Missouri River and Across the American Continent to the Pacific Ocean. performed by order of the Government of the United States, in the years 1804, 1805, and 1806. By Captains Lewis and Clarke [sic]. Published from the official report 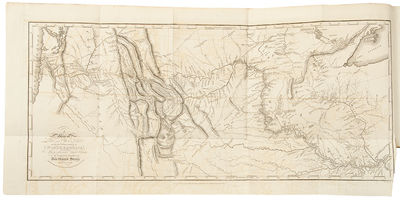 The first British edition of the great landmark of western exploration.

First British and first quarto edition of the "definitive account of the most important exploration of the North American continent" (Wagner-Camp). The book describes the U.S. government-backed expedition to explore the newly-acquired Louisiana Purchase undertaken from 1804 to 1806 by ascending the Missouri to its source, crossing the Rocky Mountains, and reaching the Pacific Ocean. In total, the expedition covered some eight thousand miles in slightly more than twenty-eight months. They brought back the first reliable information about much of the area they traversed, made contact with the Indian inhabitants as a prelude to the expansion of the fur trade, and advanced by a quantum leap the geographical knowledge of the continent. The narrative was first published in Philadelphia in two octavo volumes in the same year as the present edition. The large folding map of the West (by Neele after the Philadelphia edition map) recalls an extraordinary feat of cartography, accurately revealing much of the trans-Mississippi for the first time. Wheat notes that the map is almost identical to the Philadelphia version "except for a few minor variations." The observations in the text make it an essential work of American natural history, ethnography, and science, and it forms a worthy record of the first great U.S. government expedition. In terms of typography and paper quality, the first British edition is far more pleasing than the first American.